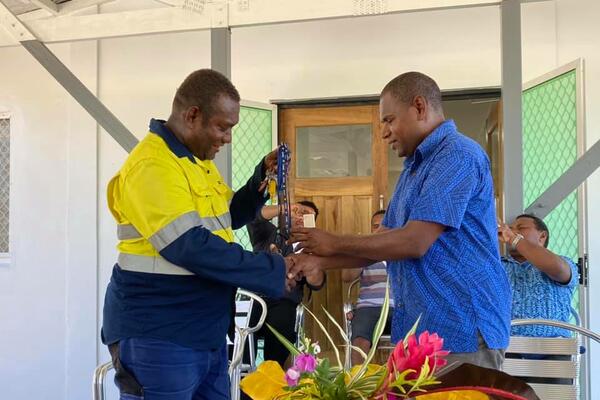 Managing Director of R&D Construction Company says it was not an easy task directing a construction project during the COVID-19 pandemic.

Mr. Ricky George was all smiles when he handed over the keys of the building to the Under Secretary of the Ministry of Fisheries and Marine Resources (MFMR) at Aruligo, North West Guadalcanal.

The MFMR has recently refurbished the old government ICLARM centre at Aruligo into a tilapia facility.

Speaking at a small ceremony to mark this achievement, Mr. George said there were a lot of challenges in terms of timeline, financial hiccups, availability of materials, and so forth.

“Because of the level of confidence and determination, the R&D Construction Company managed to finish the project on schedule”, George said.

He said it was the first time for the company to construct such a building and it took R&D less than a year to construct the building.

In response, Mr. Patteson Lusi, the Undersecretary Corporative Services, for the Ministry of Fisheries and Marine Resources (MFMR), congratulated Mr. George for finishing the “magnificent project” in time despite the COVID-19 setbacks, plus the Tropical Cyclone Harold disturbance in early April.

He stated that the R&D Construction Company has proved itself in a very competitive and crowded construction industry and should now be able to compete for further national projects on Guadalcanal.

Mr. Lusi says that the completion of the building is a huge development for the National Government in terms of the development of freshwater fisheries in the country.

He says once the facility is fully functional the hatchery will supply local aquaculture farmers with the species of tilapias (imported from Malaysia and Egypt (River Nile) so that they can create their own local tilapia hatcheries to supply our local markets.