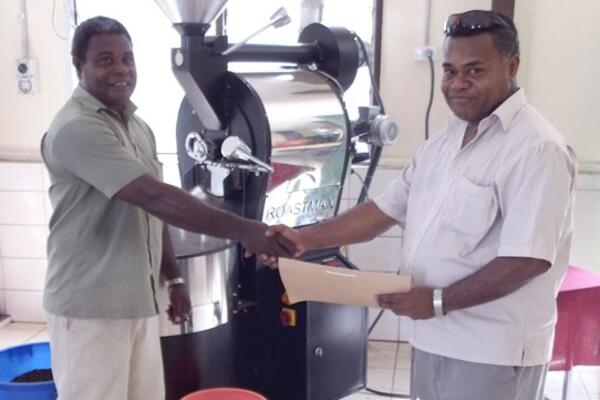 Varivao Holdings Limited, a coffee exporter from the Solomon Islands, has significantly improved its production level with support from the European Union (EU) and the Secretariat of the Pacific Community through the EU-funded Increasing Agricultural Commodity Trade (IACT) project.

Varivao Holdings managed to double its coffee production in 2012 when IACT first stepped in to provide the company with technical and business development assistance.

As a local enterprise from the Hograno district of Ysabel province, Varivao Holdings is one of the 44 enterprises currently being supported in the Pacific under the IACT project. The project is aimed at strengthening the export capacity of Pacific countries and territories in the primary industries of agriculture, forestry, aquaculture and livestock.

It was a completely different story a couple of years back, says Longamei, when Varivao Holdings struggled to process coffee for the export market; all that has changed with IACT’s intervention.

He says that support from the IACT project has contributed immensely to the success of his company.

To help Varivao Holdings process quality coffee, IACT has provided machines worth around SBD 200, 000. This includes a coffee huller, roasting machine and grinder.

IACT’s assistance has not only helped boost production, but it has also improved the flavour of the coffee sold by Varivao Holdings since the introduction of the machines.

‘The assistance provided by IACT has been a real boost. Through IACT, we have been able to take our coffee production and processing to the next level in order to better serve our markets,’ said Longamei.

IACT’s partnership with Varivao Holdings has been described by IACT Team Leader, Samu Turagacati, as a practical and effective one, in terms of strengthening the market and increasing the production base through farmer cluster groups.

‘The choice made by IACT to support and partner with Varivao Holdings is an example of a winning combination that is contributing to the growth of the coffee industry in the Solomon Islands,’ he added.

Today Varivao Holdings is a leading coffee buyer and processor in the country. While the company has its own coffee farms, it also buys green coffee beans from coffee suppliers in the Guadalcanal, Isabel, South Malaita and Choiseul provinces. This is to supplement its rising production numbers to respond to the rapidly increasing demand.

Longamei explains that his company helps coffee farmers by providing them with a source of income, as well as employment for those involved in running operations at the factory.

Turagacati says that coffee producers in the Solomon Islands can take advantage of Varivao Holdings’ existing supply chain, adding that, support from the Ministry of Agriculture and the coffee industry in the Solomon Islands, as well as the IACT project, will help the company grow from strength-to-strength in the expansion of its markets.

Varivao Holdings has about 32 field workers, 3 office staff and 6 factory workers. The company has even employed its own agriculture staff to carry out trainings for farmers and conduct quality assurance checks.

Longamei thanked EU and SPC for their support through the IACT project, and said that his company looks forward to continue working with IACT.

Apart from coffee, Varivao Holdings is also manufacturing other products, such as dried kava chips and roots, cured vanilla beans and peanuts.