Local and International Players to Clash for Charity 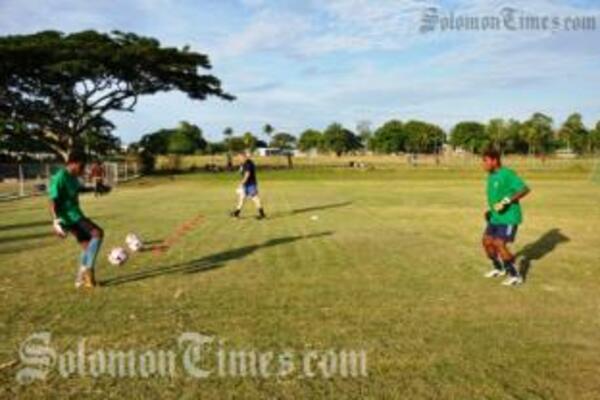 Locals goalkeepers, Bart Fisiniu and Dida Qwaina during training for the upcoming match.
Source: SIFF Media
Share
Friday, 14 May 2010 07:15 AM

The Charity Match planned for this weekend at Lawson Tama will be an opportunity for people to witness the best players in Solomon Islands go head to head while contributing to a worthy cause.

Kicking off at 3:00pm at Lawson Tama this Saturday (May 15) will be the first in the series of 3 locals v. international match featuring local based members of the Solomon Islands Senior National Team against our players playing for overseas clubs.

This is one of the rare occasions in which all the top players of Solomon Islands will be seen on the same pitch against each other.

The internationals team is looking strong with names like Benjamin Totori and Hekari United heroes Gideon Omokirio, Henry Fa'arodo and Stanley Waita. With names like these they already are favourites to win. Their experience and strength will truly test the home based players.

The locals team is under the leadership of Jacob Moli and consist of mostly young players. Nevertheless, they have spent the last 2 months together and this will be their biggest advantage. They will be playing simple football and may cause an upset against their international counterparts.

The idea of locals v. internationals match came about after negotiations to bring in the New Caledonia team fell through.

Solomon Islands Football Federation (SIFF) General Secretary, Eddie Ngava, explained that despite the negative outcome of the arrangements with the Oceania Football Confederation (OFC) SIFF was committed to bring its original plan into fruition.

"The SIFF Executive decided that we organize these matches as an alternative to bringing in an international team. Our plan was to help Goldie College raise funds to purchase a new generator and SIFF will do its part as promised to the school," Ngava said.

The public is encouraged to turn up at Lawson Tama to enjoy the match and support Goldie College.

All proceeds from the match will go to Goldie College.

"We are calling on the public, especially former students of Goldie College, to come forward and support this worthy cause," Ngava said.

The second match will be held immediately after the Our Telekom National Club Championship. The final match in the series will be held on June 19th.