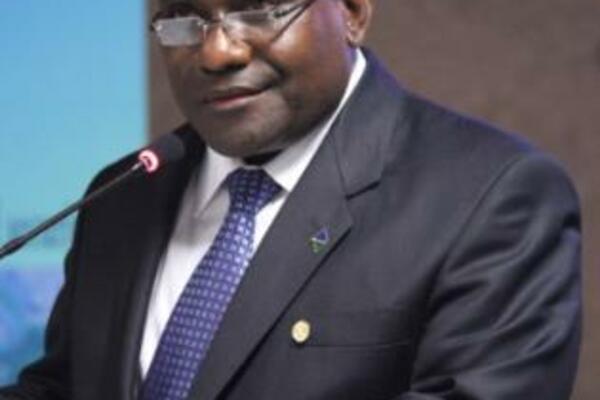 Hon. Lilo says the private sector will be the key drivers in the Solomon Islands economic growth.
Source: coraltriangleinitiative.org
Share
Monday, 22 October 2012 09:46 AM

Gordon Darcy Lilo delivered the keynote address focusing on the opportunities for the Solomons, but also on the problems of bringing about cultural change in a country which is often reluctant to embrace the modern world.

In recent years economic forecasts have shown an improvement in the Solomon Islands economy - a welcome change from the period of ethnic tension which left it a virtually failed state by 2003, prior to the arrival of the regional assistance mission RAMSI.

In the interview, Lilo states that Solomon Islands is now embarking on a land reform and as a result, are now fully and actively engaged with land registration.

"It is also the intention of our government to continuously improve doing business climate by enacting appropriate business friendly policies and laws. We believe there is potential in copra, cocoa, coffee. We believe we have potential in mining. Solomon Islands is one of the few countries that mining deposits are yet to be fully explored and fisheries. The tuna industry is worth three billion US dollars. Solomon Islands will soon be connected to the South and Sea Table which will link us to the rest of the world. This connection is expected to be fully operational by the end of 2014, will reduce communication costs significantly and improve efficiency and create a new information and communication industries and will ease the business registration process. The private sector will be the key drivers in the Solomon Islands economic growth."

With most of the local people reluctant to give up land for investment, Lilo admits that it is an issue that they are still dealing with.

He says that the modern state systems are relatively new and culturally foreign. And in this context, the condition from traditional economies or societies to modern nation states present a myriad of challenges and conflict.

A large part of the reason that Solomon Islands has begun attracting investment has been the presence of the Regional Assistance Mission RAMSI, but in 2013, RAMSI will undergo some changes as stated by RAMSI Special Coordinator, Nicholas Coppel.
"Subject to final decisions made by governments, it is planned that the police will stay for at least the next four years, that the military will leave in the second half of next year, and that most of RAMSI's development assistance will be absorbed into the bilateral assistance program run out of the Australian High Commission from 1st July, next year. If this all goes to plan, at some point in the second half of 2013, RAMSI will become a policing only mission."

Mr. Coppel stated that RAMSI will become a smaller mission with a narrower focus. This is because Solomon Islands today very different from the country that less than a decade ago was being referred to as a failing state. RAMSI's transition is a clear signal that Solomon Islands is back in business, that Solomon's is a country that no longer needs an extraordinary intervention involving a foreign and military force and an interventionist post-conflict model of development assistance.

Despite the challenges ahead with the transition, Hon Lilo said Ramsi must be task bound and now time bound.