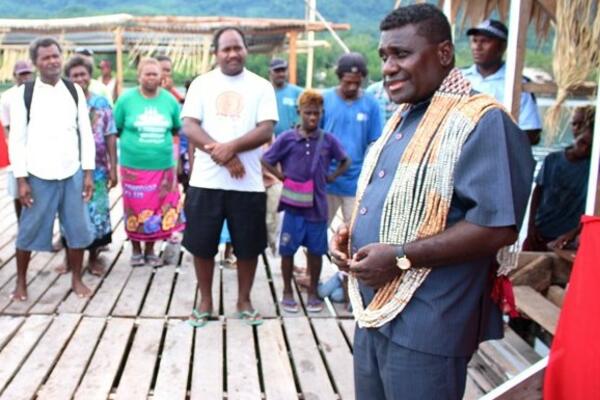 With the approach, attitude, commitment and cooperation that has resulted in the successful completion of the two Churches, the Prime Minister stated that this was the right path towards more development progress in communities.
Source: Government Communications Unit
Share
Monday, 06 January 2014 07:55 AM

On a recent visit to Ata'a, Fataleka in Malaita Province to witness the consecration of two new Churches, the Solomon Islands Prime Minister, Hon. Gordon Darcy Lilo took the opportunity to encourage locals to support the country's development.

“You have the land, sea, river systems, fish, forest, harbor and other abundant natural resources. These can be developed to add value and benefit to everyone,” Mr Lilo said.

However, Mr Lilo said that the land and its resources must be given willingly in order for roads, hydro-power stations, port facilities, fisheries facilities, tourism outlets, resorts and other investments to be built.

The Prime Minister highlighted that over the years, the approach used by previous Governments for development was to force people to do things.

“In other words Government dictates what people do with their land or seas. In the end people lose control of their land and resources without much gain and this has happened in many parts of the country,” he said.

Therefore, Mr Lilo said the current NCRA Government now realizes that over time this system has either divided or marginalized people.

“What we decided to do now is to let people drive their own developments. People will decide what they want to be developed on their land or their seas and the Government will be simply there to partner with resource owners,” the Prime Minister said.

“But for this to happen, the resource owners must stand together and sort out their internal land and sea disputes and must develop a common strategy and vision which has everyone’s interest at heart,” he said.

The Prime Minister encouraged people in Ata’a that the approach, attitude, commitment and cooperation that has reflected in the successful completion of the two Churches in Fourau and Lobo was the right path, that the people must continue to do to see more development progress within their community.

“When you do that, the Government will be more than willing to be a partner,” Mr Lilo said.

Prime Minister Lilo also highlighted to people in Ata’a some of the ways the Government can help develop their region.

“As you know, Parliament has passed the Constituency Development Fund (CDF) Act this year and Parliament has also established a bi-partisan committee to oversee the drafting of the CDF regulations,” Mr Lilo said.

Thus, Mr Lilo said inorder to make the CDF work; the communities need to work together with their Member of Parliament.

“You will need to sit down and agree on your priorities and then you will need to set this out in your Constituency Development Plan. It is this plan that will guide your MP not only in terms of spending of government resources but also looking for new resources. But the plan should also guide you as individual farmers, fishermen, entrepreneurs to obtain other private or international assistance,” Prime Minister Lilo highlighted.

However, the Prime Minister cautioned that people must approach the CDF with responsibility.

He said it is not a welfare system where one can just go and get a bag of rice or a coffin or some other private expenses like what is happening in the country.

“We expect those funds to be used for wealth creation and community infrastructure which benefits many people and not just individuals,” Prime Minister Lilo said.

Taking the opportunity, the Prime Minister also briefed people in Ata’a on some national programs. These include SINU, the Political Party Bill and the Voters Registration.

Mr Lilo said the Government will continue to strengthen the capacity of the Solomon Islands National University (SINU) next year; despite the shortfalls and challenges faced.

He adds that the Government also continues to encourage all Solomon Islanders to attend primary school.

“The ministry of education is also creating new schools at primary and secondary school levels and this is important as the Government views education to be the most crucial determinant of a successful person’s life,” he said.

The Prime Minister also said they are optimistic in passing the Political Parties Integrity Bill so that there can be some stability within the country’s political system.

He said this would address the problem of grasshoppers which is used to describe MPs crossing the floor more than once causing political instability.

On the issue of Voter Registration, the Prime Minister said a new a new voter’s registration list will be created for next year.

Mr Lilo said as part of the Government’s plan to fast track its progress, officials from the the Ministry of Home Affairs will be visiting all the Constituencies to update the list for 2014 General Elections.

“Please cooperate with the officials when they come to visit your Constituency so that we can have a fair and good election in 2014,” he said.