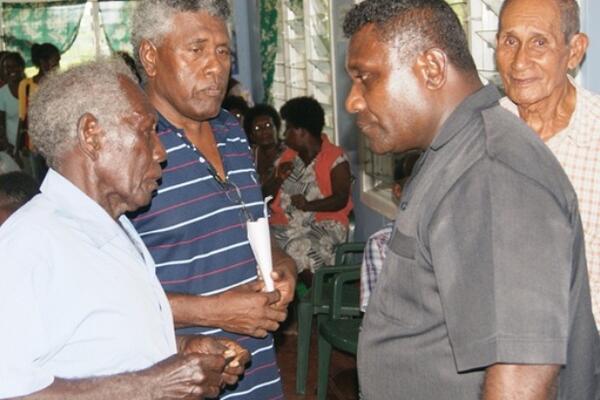 Following heated but successful discussions by the parties, leaders of all the parties as well as youth and women representatives signed an agreement with the Government to allow the project to continue.
Source: Government Communications Unit
Share
Monday, 11 March 2013 08:53 AM

The Prime Minister flew to Munda last Saturday where he held a 3 hour meeting with the disputing parties and convinced them to sign a deal to end a land row which halted work on the New Zealand funded multi-million dollar project in past weeks.

Work on the project is now expected to resume today, Monday 11th March.

Three parties disputed a gravel site resulting in the closure of the Vulea /Mamamisi quarry which supplied gravel for the project in recent weeks.

New Zealand High Commissioner, Mark Ramsden who was invited to attend the meeting had earlier announced that his Government could withdraw its funding from the project if the dispute was not resolved.

In an urgent move to address the issue, Mr. Lilo had personally taken the lead in resolving the issue and discussed with the community about the importance of the airport to the region and the country at large.

He said it was important that the disputing parties allow the project to continue as the benefits that associate with it will be huge and they will be the direct beneficiaries.

Mr. Lilo encouraged the people of the community to appreciate the assistance that New Zealand had given and they in turn should give full support to the development.

The meeting was attended by all parties and the communities in Munda.

Following heated but successful discussions by the parties, leaders of all the parties as well as youth and women representatives signed an agreement with the Government to allow the project to continue.

They also agreed that there will no disputes and disturbances until the project is completed.

The Government in turn has agreed to provide financial assistance and the funds will in the meantime be in the custody of the Attorney General.

Prime Minister Lilo said he was extremely happy with the understanding reached between the parties.

“I’m absolutely thrilled that we have sorted the problem to allow the project to resume. I can’t emphasis the importance of this project to Munda, Western Province and the Solomon Islands,” he said.

All leaders from the Government and the Munda community that have contributed have spoken highly of the Prime Minister for taking the initiative to resolve the dispute.