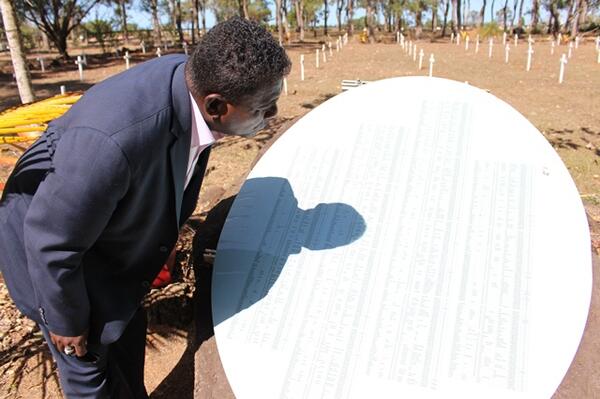 As part of the programme, the Prime Minister visited unmarked graves of Solomon Islanders and other Melanesian men, women and children who worked as slaves during the blackbirding days.
Source: Government Communications Unit
Share
Monday, 19 August 2013 07:48 AM

Solomon Islands Prime Minister, Hon. Gordon Darcy Lilo has paid tribute to Solomon Islanders who were part of the South Sea Islanders taken as slaves to Queensland, Australia 150 years ago.

The Prime Minister, was the guest of honour during the 150 years black birding anniversary in Bundaberg, Queensland.

Upon arriving in Bundaberg last Saturday morning, the Prime Minister and his delegation were welcomed by Bundaberg’s mayor Mal Foreman and Solomon Islands descendants living there.

During the fellowship, Pastor Roy Funu thanked the Prime Minister for availing his time in respect of the lost tribe of Solomon Islands who were taken as slaves to Queensland 150 years ago.

“I would like to honor Mr Lilo for his humility as the first ever Prime Minister from the Solomon Islands to attend this special occasion in remembrance and respect of our lost generation,” pastor Funu said.

Pastor Funu said for a leader of a country to visit his lost generation in Bundaberg; speaks volumes of a man of such high caliber.

As part of the programme, the Prime Minister visited unmarked gravesites of Solomon Islanders and other Melanesian men, women and children who worked as slaves during those days.

The Prime Minister and his delegation also visited sites where the slaves docked on bunderberg as well as gravesites and a place where the islanders once built their church but was burnt down.

Prime Minister Lilo saw sites where some of the islanders were claimed to have been hanged to death during those days by their masters. It is believed that about 15,000 south sea islanders were buried around Queensland in which more than 4,000 were believed to be buried in Bundaberg alone.

The Solomon Islands community in Bundaberg was joined with others from New Caledonia, Vanuatu and Papua New Guinea thanked the Prime Minister for visiting them.