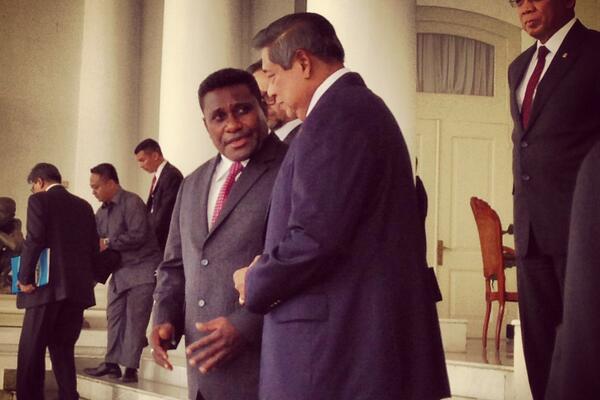 Two-way trade between Indonesia and Solomon Islands was valued at SBD$105 million in 2012 with an average annual increase of 17.28 % over the past five years alone.
Source: setkab.go.id
Share
Wednesday, 28 August 2013 07:14 AM

The Office of the Prime Minister and Cabinet (OPMC) has hit back at civil society groups urging them to look beyond the costs associated with the trip to Indonesia.

A statement from OPMC said that such State visits offer opportunities to the country that one must take full advantage off. The statement says that the size and composition of the delegation reflects the “importance the current government places on Indonesia, particularly as a trading partner.”

“Such opportunities would result in jobs as well as opening up the path for Solomon Islands to engage with the ASEAN economies,” the statement reads.

Prime Minister Lilo says that to enhance Solomon Islands competitiveness in the long run it is important to take advantage of such opportunities when they arise.

Two-way trade between Indonesia and Solomon Islands was valued at SBD$105 million in 2012 with an average annual increase of 17.28 % over the past five years alone.

“We are keen to see that increase in the coming years, to do that we must engage actively at the highest level.”

The OPMC said the latest attack carried out by the civil society group was “no doubt a personal attack by disgruntled minority groups that have personal grudges against the Prime Minister.”