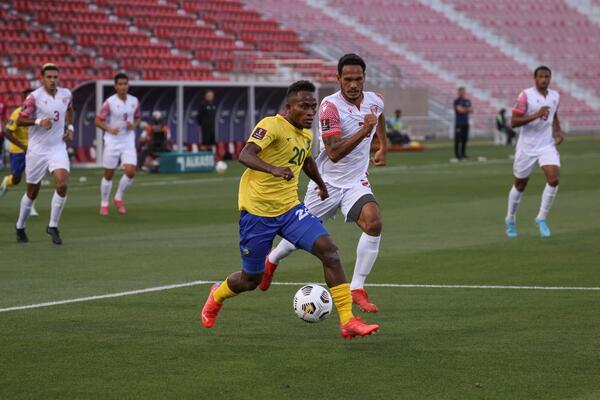 Raphael Lea’i scored a hat-trick in the game, a testament to the strong combination up front and the teams willingness to attack.
Source: OFC
By Jimmy Nolan
Share
Friday, 25 March 2022 10:33 AM

Solomon Islands has topped Pool A after a strong performance against Tahiti, finishing the game 3-1.

Raphael Lea’i introduced himself to the World stage with a hat-trick, a feat that is commendable for a player his age, and this also being his first international outing with the senior squad.

Suburbs in Honiara erupted in cheers in the early hours this morning as they watched the young Solomon Islands side outperform Tahiti on the soccer pitch.

It did not take long for Solomon Islands to find the net, a through ball found Le’ai who beat two Tahitian defenders and slotted the ball home.

Tahiti replied soon after, keeping the ball alive after clearance by the Solomon Islands defence in the penalty area, Alvin Tehau headed home a chip pass to level the game.

Tahiti pushed hard in the second half searching for goal, they pushed numbers into the Solomon Islands 18-yard box but was caught by a Solomon Islands counter attack - Lea’i struck the perfect shot from a through ball by Joses Nawo.

The game was evenly contested for the remainder of the match, but with time running out Tahiti made one last gasp attempt, sending players forward in search of an equalizer. Solomon Islands made them pay, and had the final say on stoppage time with a counter attack led by captain Micah Lea’alafa. It was the icing on the cake for Solomon Islands, with Lea’i slotting home his third goal for the night.

Solomon Islands has shown that it has what it takes to go all the way. They now take on Pool B runners up PNG for a spot in the finals.

Solomon Islands will count on its youthful squad - the hunger and confidence shown by the young lads on attack gives hope to the masses. It will be a nervy wait, but Solomon Islanders have good reasons to believe this is their time.