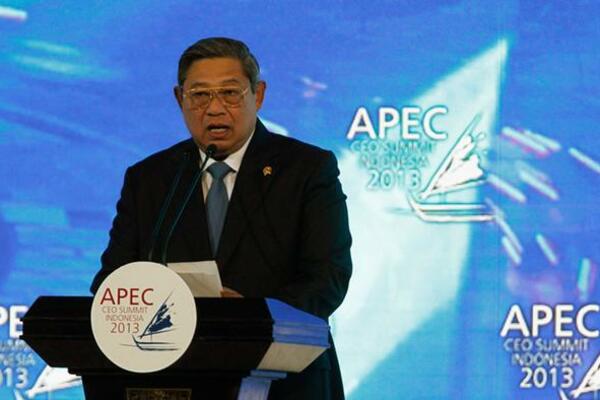 Leaders and envoys of four Pacific Island nations enjoyed a one-hour informal meeting with leaders of APEC economies on the sidelines of the second session of the APEC Leaders retreat on Tuesday, thanks to the initiative of President Susilo Bambang Yudhoyono, this year’s APEC chair.

The Pacific leaders were Anote Tong, the President of Kiribati; Gordon Darcy Lilo, the Prime Minister of the Solomon Islands; Ratu Inoke Kubuabola, the Foreign Minister of Fiji; and Tom D. Kijiner, a special envoy of the Marshall Islands.

The meeting could be the most important diplomatic event during the summit for their respective nations as they met with leaders of the region’s big players such as Australian Prime Minister Tony Abbott and South Korean President Park Geun-hye.

“To be honest, during this whole APEC Leaders’ week, the short meeting with the Pacific leaders was one of the most interactive meeting. The leaders seemed to have spoken their hearts as they were able to convey what really concerned them since the meeting was informal,” Foreign Minister Marty Natalegawa told The Jakarta Post.

Each of these four nations has a population of less than 1 million. They are among 16 members of the Pacific Islands Forum (PIF), including Australia and New Zealand. Two of them, the Solomon Islands and Fiji, are members of the Melanesian Spearhead Group (MSG).

These two regional blocs, however, have been struggling to attain global leverage, particularly given the weak economic profiles of most of their members.

“These nations are willing to contribute, but their opinions, views and cares have seemed to always be put aside,” Marty said. “But just now, we have them a platform to make their voices heard.”

The minister said the role of Pacific nations in the region seemed to have been underrated. “APEC should not be East-Asia centered or Latin-America centered. APEC must be complete,” Marty said.