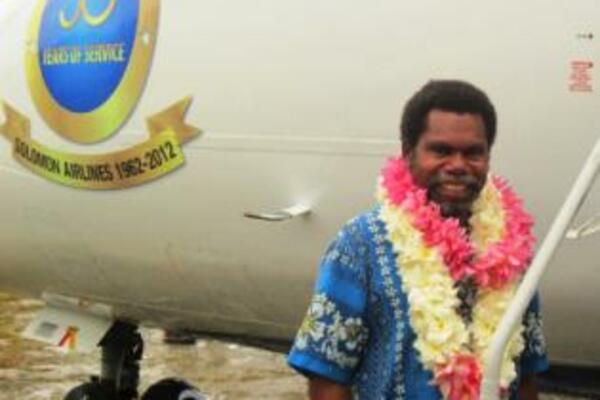 Temotu Premier Father Charles Brown Beu thanked Solomon Airlines and its board for linking Lata to the rest of the country through its services.
Source: Photo supplied
Share
Friday, 23 November 2012 07:58 AM

Solomon Airlines new Dash 8 aircraft marked its first inauguralservice in the country with a flight to Lata in Temotu Province onTuesday 20 November.

The aircraft was met with a warriors welcome as hundreds turned out to witness the arrival of the Dash 8 aircraft and to mark the airline's 50th anniversary.

In his official welcome Temotu Premier Father Charles Brown Beu thanked Solomon Airlines and its board for linking Lata to the rest of the country through its services.

The Premier said the impact of having an efficient and regular services through the Dash 8, would benefit the people of Temotu. He said the airlines met the demands of his people who for long have relied on an irregular shipping service.

Flying time from Honiara to Lata on the Dash 8 is 1 hour 30 minutes, compared to the two hours 30 minutes on a Twin Otter. Travel on ship would take more than several days.

The Premier said the provincial government and the people of Temotu are pleased with the service provided by Solomon Airlines, especially now with the introduction of the Dash 8 aircraft.

Looking into the future, the Premier said he would open up negotiations with Vanuatu to enable the Dash 8 to provide a service linking Lata to Santo, saying this would cater for an increasing number of tourists wanting to visit Lata. Apart from Lata, the new Dash 8 will provide services to Auki, Gizo, Munda, Seghe and Kirakira.

The 36-seater aircraft is part of Solomon Airlines domestic fleet of two Twin Otters and two Islanders. Named the Megapode in tribute to the airlines' beginnings as Megapode Airways, which began as a charter service in 1962.

The $40 million Dash 8 is Solomon Airlines biggest investment to date. The Dash 8 arrived in Honiara last week as Solomon Airlines celebrated its 50th anniversary with the opening of its new $2 million office complex.