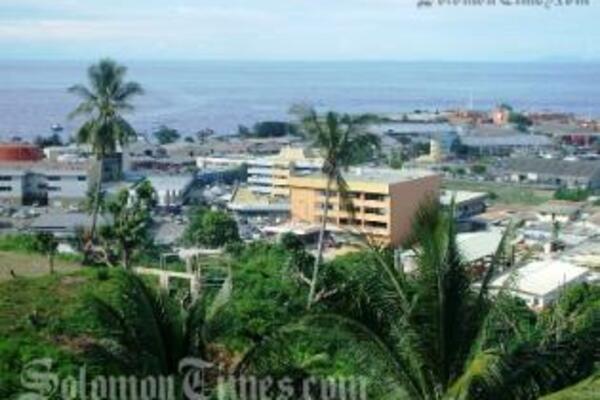 Mr Panga says land on Guadalcanal is, "very sensitive to the people and it has been the main catalyst behind the social unrest experienced in the country."
Source: STO Archives
Share
Tuesday, 03 November 2009 09:06 AM

Guadalcanal premier, Steven Panga, says there will be no meaningful reconciliation on Guadalcanal until the land dealings on the island are sorted out.

Recent media reports say that Mr Panga made this statement when he met with commissioners of the Commission of Inquiry into land dealings on Guadalcanal on Tuesday.

Mr Panga says land on Guadalcanal is, "very sensitive to the people and it has been the main catalyst behind the social unrest experienced in the country."

He however acknowledges that part of the problem has to do with the Guadalcanal people selling land to private or businesses without the consent of the whole tribe or the provincial government.

Mr Panga says his administration is taking the necessary steps to enact an ordinance that would safeguard the process of managing and administering the affairs of customary land on Guadalcanal.

Secretary to the Commission, Chris Waiwori says the commission is approaching the land dealings through a social mapping programme.

He says the proposed social mapping will be conducted around the 21 wards on Guadalcanal, purposely to record information regarding the chiefs, tribes, clans, lands, customary landowners and the customary practice of acquiring land and ownership in those particular areas.

Mr Waiwori says the second round of consultation will investigate the abandoned lands and properties affected during the social unrest.

Premier Panga pledges his government's support to work closely with the Commission to ensure that the issue of land on Guadalcanal is settled once and for all.

The Commission of Inquiry officials will travel to Auki this week to meet with the Premier of Malaita Province.