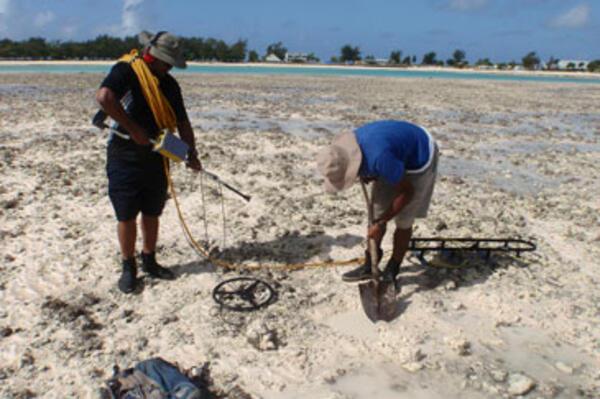 A survey of the South Tarawa lagoon has revealed some potentially explosive secrets from its past as a major battleground of World War II. The survey was designed to identify battle debris that still litters the floor of the lagoon seventy years after the infamous Battle of Tarawa in 1943.

22 May 2013, Secretariat of the Pacific Community (SPC), Tarawa – Kiribati

Funded by the New Zealand Regional Ocean Science Grant, the survey was undertaken as part of the government’s work to reduce the atoll’s damaging reliance on beach mining by identifying potential sources of construction aggregate on the floor of the Tarawa Lagoon. The widespread practice of beach mining has been weakening the atoll’s vulnerable shoreline at a time when the government is trying to protect communities from the worsening impacts of climate change and rising sea levels.

The government turned to SOPAC, the Applied Geoscience and Technology Division of the Secretariat of the Pacific Community, for guidance on safe methods to dredge an alternative source of sand and gravel from Tarawa’s southern lagoon.

Before dredging can begin, as part of the European Union-funded Environmentally Safe Aggregate for Tarawa (ESAT) project, SOPAC first needed to identify any potential problems that might be posed by unidentified and unexploded ordnance.

During World War II, Kiribati saw one of the Pacific’s bloodiest encounters. From 20–24 November 1943, an invasion flotilla of 18,000 US Naval and Marine Corps troops attacked the fortified Japanese garrison on Betio in Southern Tarawa. The 4,600 Japanese defenders fought almost to the last man, and more than 1,000 Americans lost their lives.

SOPAC’s survey leader, geophysicist Robert Smith, is still analysing the data but he has already identified two previously unknown vessel wrecks and unearthed numerous artillery remnants. Of the vessels, Smith says, ‘These may be sunken Higgins boats, which would have carried 20–30 marines each.’ The US government has expressed a keen interest in Smith’s findings.

The Battle of Tarawa was the first American offensive in the central Pacific. Tragically for US forces, the lagoon was too shallow for even the four-foot shallow draft Higgins boats that tried to approach the beaches of Betio during a neap tide. According to observers in 1943, the troops were forced to wade hundreds of yards to the beach or use unarmoured amphibious landing vehicles.
Sources suggest that the US military fired or dropped more than 2,400 tons of military weapons onto Betio during the amphibious landings. Failure rates for the ordnance are estimated between 25% and 30%, so it is likely that a large quantity did not explode.

In addition to uncovering this fascinating historical find, the completed survey will also bring greater accuracy to new sea floor maps and charts, ensuring safe passage for cargo and transport vessels. This represents a critical step in clearing the path for the ESAT lagoon dredging project and also satisfies the navigation needs of the Kiribati Ports Authority.

According to Smith, ‘It should be possible to locate areas where the dredge can safely operate, but it will require some very careful debris removal.’

In this way, the SOPAC project to replace the unsustainable practice of beach mining with more environmentally friendly dredging from the lagoon may also help to diffuse this potentially explosive problem from Tarawa’s violent and not-so-distant past.