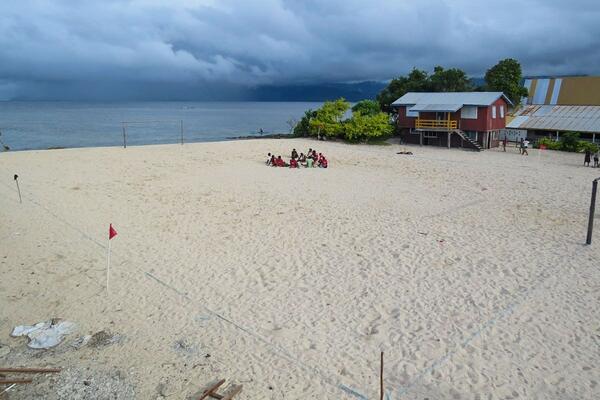 Beautiful Kwai island has long been known for its white, sandy beaches and is now host to the Malaita Beach Soccer Tournament.
Source: SIFF media
Share
Wednesday, 11 December 2019 05:05 AM

Kwai has long been known for its white, sandy beaches. In more recent years, however, it has gained attention for bearing the brunt of sea-level rise and coastal erosion. Encroaching waters have eaten away at traditional food gardens and homes.

The Beach Soccer tournament is jointly organized by the Member of Provincial Assembly (MPA) for Malaita’s Ward 16 and Minister for Women, Youths, and Sports Preston Billy together with a Local Organising Committee (LOC).

Hosts Kwai displayed their class on matchday one of the Kwai beach soccer championship as 20 teams convened on the east Malaita Island for a festivity of sporting activities on the sand.

With the likes of Bilikiki players Allen Fa’arobo, Roy Mafane and Max Fa’ari in their ranks, Kwai red dispatched the cousins Kwai white in the opening match of the tournament.

The trio got on the score sheet as defensive duo Fa’arobo and Mafane notched a brace each while Fa’ari has four goals to his name in an 8-4 opening win.

Teams from other nearby communities in east Malaita also graced the sand.

“I believe Malaita will produce more players for our national team as Kwai Island has five players that represented our country at the recent OFC Beach Soccer championship in Tahiti,” he said.

“Hosting this tournament is part of our long-term vision to develop the sport in our province. It is very encouraging to see our nearby villages are showing interest in beach soccer as our national players become role models.”

Deputy Premier of Malaita, Randle Sifoni who officially opened the tournament said his pleased to see that Kwai Island has taken the initiative in hosting such event.

“I am very happy to witness this special occasion where our young people will enjoy during this festive season,” he said.

“Therefore I am happy to officially open the Kwai beach games and wish all the participating teams the very best.”

MPA Preston Billy said the event is not only to engage youths in sporting activities but it will also be a part of developing potential Beach Soccer, Beach Volleyball, and triathlon players to represent the Solomon Islands in the Pacific Games 2023 in Honiara.