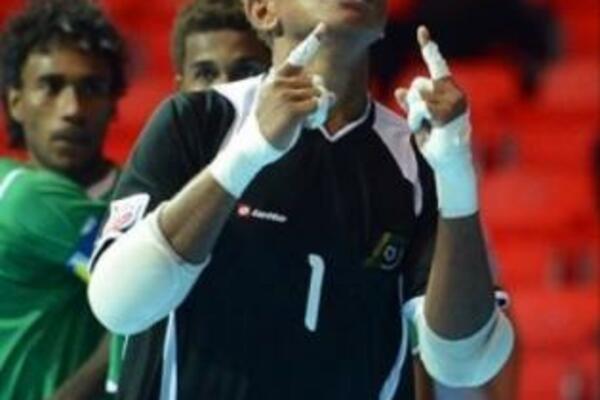 "It's just amazing. This was my first World Cup, so I never even dreamed that I would score here," says Anthony Talo.
Source: fifa.com
Share
Monday, 12 November 2012 08:30 AM

Scoring a goal at a World Cup is impressive enough, but doing so at just 16 makes the achievement considerably more remarkable for Solomon Islands, Anthony Talo .

Slip in the fact that the youngster in question is a goalkeeper and the tale begins to seem a little fanciful. By the time you mention that the goal was a shot from his own half, which won the match for the Solomon Islands - known for losing by huge margins - people will probably have stopped listening. It does, after all, sound like the stuff of fantasy.

Yet this is the entirely true story of Anthony Talo, his unforgettable strike and the Kurkuru's first-ever win at the FIFA Futsal World Cup. And after it was all over, he seemed as stunned as anyone.

"Words cannot describe how I feel," Talo told FIFA.com. "It's just amazing. This was my first World Cup, so I never even dreamed that I would score here. It was such a fantastic moment for me. I want to dedicate this goal to the people of the Solomon Islands, and I hope the people who watched it back home shared in my joy."

Talo is one of just five goalkeepers to score at the FIFA Futsal World Cup, and is comfortably the youngest of this quintet. He is, in fact, the second-youngest player of any position to find the net at this event and, in a strange twist of fate, the youngest - Safouk Al Temyat - grabbed his landmark goal on 8 January, Talo's birthday.

However, the Solomons keeper's effort, launched into Guatemala's net from his own box, was not actually his first. Talo has, he explained, score twice before, though only in local competitions back home. "This goal felt a bit different to those ones!" he acknowledged. "It's definitely my favourite so far, and hopefully there will be others in the future."

Further sparkle is added to Talo's fairy tale by the fact that he would almost certainly have been on the sidelines but for the Solomons' first-choice keeper, Paul Huia, being suspended. As it was, the youngster played a key role in making history for his nation, and sparking a party in the Kurukuru's dressing room that could be heard echoing through the corridors of Huamark Indoor Stadium.

"We were overjoyed in there," Talo said, grinning. "We were all going round thanking and congratulating each other, and then we all came together to sing the national anthem. Our team is so happy to finish in this way. I think the difference today was that everyone played at the same level, with the same intensity, which hasn't happened in all of our previous games.

"We all worked hard for each other and pushed each other on. It was a real team effort. This result and this performance shows that we can compete at this level, and that gives us something to build on for the future."

With players as young and talented as Talo, that future should be bright. Whether it will contain any more tales as fantastic as their teenage keeper's seems considerably less likely.