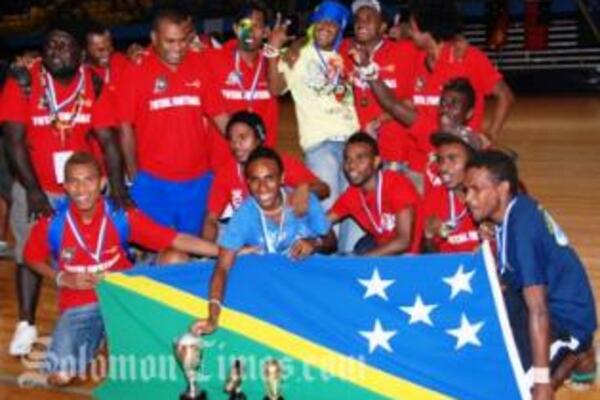 Hundreds more are expected to line the streets as they parade through town with the winning trophy.
Source: Photo Supplied
Share
Monday, 23 May 2011 07:29 AM

Solomon Islands much loved Kurukuru Futsal Team will return home today to a heroes welcome. Hundreds have made the trip to Henderson Intentional Airport to greet these young brave hearts. Hundreds more are expected to line the streets as they parade through town with the winning trophy.

Solomon Islands have again reached the FIFA Futsal World Cup for the second consecutive time after claiming their fourth successive OFC Championship title. Dickson Kadau's side overcame Tahiti 6-4 in the final to book their place at next year's finals in Thailand.

Among the top performers for the Kurukuru were captain Elliot Ragomo and Jack Whetney, whose goals in the decider brought the defending champions back from 4-1 down to reclaim their crown. "It feels amazing, this is our dream," said Ragomo. "We have worked hard for this and we really deserve it. We will make the Solomon Islands and Oceania proud."

New Zealand, who was unfortunate to lose to Tahiti on penalties in the semis, beat Vanuatu in the match for third place in another shoot-out following a 1-1 draw after extra time. Kiwi keeper David Plowright was the hero, scoring and saving the decisive spot-kicks to earn his country the bronze.

The two finalists' superiority was evident from the group stages, in which Solomon Islands won all three of their matches, netting an astonishing 30 goals. Tahiti also impressed, losing only once in the first round in a 1-0 defeat to the eventual champions. Only New Zealand managed to score more group-stage goals than the serial title winners with 31. Their two victories and one draw were enough to finish top of Group A, narrowly ahead of Vanuatu.