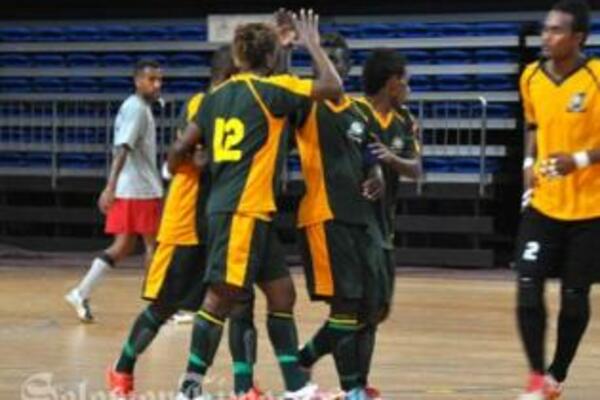 The Solomon Islands have shown why they are the favourites at the OFC Futsal Championship Fiji 2010 after an emphatic 9-2 win against New Caledonia on Saturday.

Suva's Vodafone Arena came alive on Saturday evening as the young Kurukuru wowed fans with a dominant performance including a hat-trick from star player Elliot Ragomo.

It was 2009 Golden Boot winner Micah Lea'alafa who got the scoring underway in just the third minute with a powerful shot from a tight angle.

Ragomo doubled his side's lead in the 10th minute firing into the top corner with an impressive left-foot strike. Lea'alafa scored his second in the 19th minute before New Caledonia scored an own goal just before the break.

Solomon Islands pulled out plenty of tricks in the second period, much to the delight of the fans who had packed Vodafone Arena almost to capacity.

But it was New Caledonia who were first to score, Cedrick Humuni capitalising on a defensive error in the 22nd minute.

Caryl Thepinier also got on the score sheet for New Caledonia in the 29th minute, but it was in between two well taken goals from Ragomo.

Jack Wetney then got in on the action with a quick double inside the last minute, saving the best till last with a low strike that gave goalkeeper Ronan Euzen no chance.

The 9-2 scoreline may have flattered the Kurukuru but in a round-robin competition every goal is crucial.