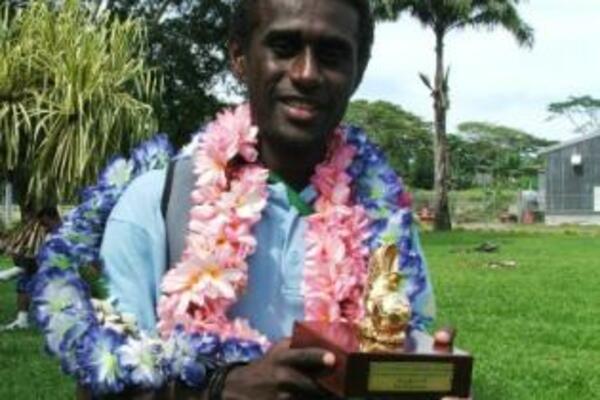 The National Futsal Team has arrived back in the country last week after competing in the Alfateh Intercontinental Futsal Championship in Libya.

Families and supporters gathered at the airport to welcome the young heroes who took Solomon Islands Futsal to new heights in the championship.

There was excitement and relief in the faces of families and supporters as the team walked out of Henderson International Airport. The players were garlanded with colourful flowers prepared for the youngsters who by the year have raised themselves higher in the indoor version of the most popular sport in Solomon Islands.

Speaking to reporters on arrival, Captain Elliot Ragomo, said that the team is happy and proud with what it has achieved and thanked everyone for their support. 'It has been a wonderful opportunity and experience for us,' Ragomo said. Elliot received the tournament's golden boot award scoring a total of 9 goals in just 3 matches.

The players looked tired but also relieved that they are back home. 'We are very tired and we really need to get some rest,' Solomon Islands Football Federation representative, Samson Faisi said.

A small ceremony was held at the airport to formally welcome the team. Representative of the families and father of Elliot, Geso Regomo, thanked the team management saying that the families are happy that their kids are safe.

A thanksgiving service was also organised for the national team at the St. Barnabas Cathedral last Sunday.