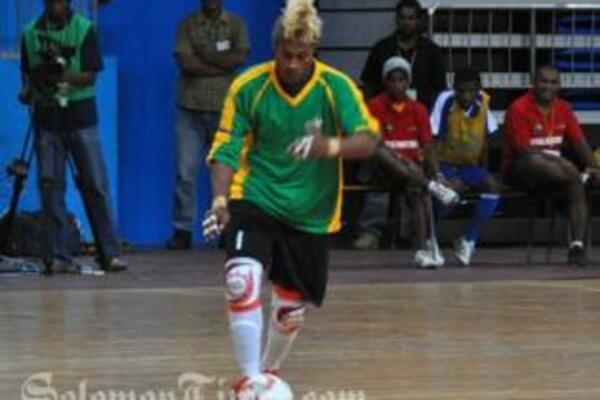 The Solomon Islands were in a confident mood at the OFC Futsal Championship today playing with a 'fifth attacker' for much of the game against Tahiti.

Dickson Kadau's side kept up their winning ways with a 6-2 scoreline to extend their lead at the top of the table after contenders Fiji dropped points against New Zealand.

With the introduction of goalkeeper David Lafai in the second period, the Kurukuru experimented with the 'power play' of futsal where Lafai stepped into the attack acting as a pivot on the halfway line.

Solomon Islands looked comfortable from the outset with captain Elliot Ragomo hitting the post in the first minute of the game.

The 19-year-old hit the upright again soon after before putting one away in the 9th minute.

But the Tahitians hit back through Meiarii Si Man after a 12th minute breakaway. That goal seemed to spring life into the Kurukuru team as they scored two more before the break, including a stunning back heal from Lenson Bisili.

The Solomons tried their luck with a five-man attack in the second period but Tahiti did well to contain them as Jack Wetney was the only one to break through inside the half-hour mark.

Loic Oldham brought the deficit back to one when he scored in the 28th minute before Micah Lea'alafa and Jeffery Bule took the score out to six, making it another impressive outing for the Kurukuru.