Kurukuru Goes Down to Libya 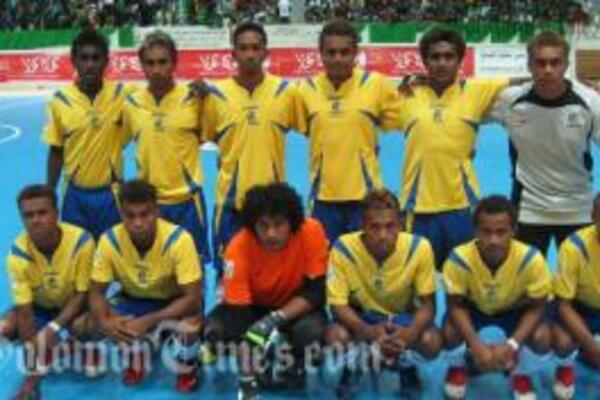 The young Kurukuru side lost to hosts Libya in their first match but made for themselves a heroic introduction at the Alfateh Intercontinental Futsal cup.

The hosts, ranked 26 in the world, barely escaped with 6 - 5 nail biter against the young side which is ranked at 64. The island boys went as far as leading the hosts by 3 - 1 at one stage in the game.

The game started with both teams going at each other neck to neck both in attack and in defence.

"The game was played at a frantic pace," Team Manager, Mapuru Tausinga reported back from Libya. "The boys played very well against their much more experienced opponents."

Kurukuru's pressure paid of quite early when Elliot Ragomo netted his first and the added a second. Jack Wetney then extended the lead to 3.

Libya answered with only 1 goal as the Kurukuru side totally outplayed them in the first half.

With the skill level in Kurukuru's favour it was always going to come down to strategy and Libya returned to the court with all guns blaring and mounted a relentless attack on the youngsters in the second half. Eventually, they caught with up Kurukuru, who despite adding another 2 goals through Micah Lea'alafa and Jenan Kapu, could not hold back the Libyan onslaught.

Down by only 1 goal at 6 to 5 Kurukuru knew that it was very possible for them to equalise and regain the lead. Time and time again they bombarded the Libyan goalmouth but save for near misses and a very good goalkeeper for the hosts the boys could have claimed a win.

At the final whistle it was 6 - 5 in favour of the hosts who barely escaped from what could have been a famous victory for Solomon Islands. Even though Solomon Islands dominated the game the Libyans had more experience and stood firm for the win.

Team Manager, Mapuru Tausinga was happy with the performance of the boys saying that Kurukuru really played at the standard expected of them.

"When we arrived people had no idea where Solomon Islands is but now I believe they will want to find out," Mapuru said. "The boys, especially Elliot and Jack, really wowed the crowd with their skills."