Kurukuru Gives Thanks to God 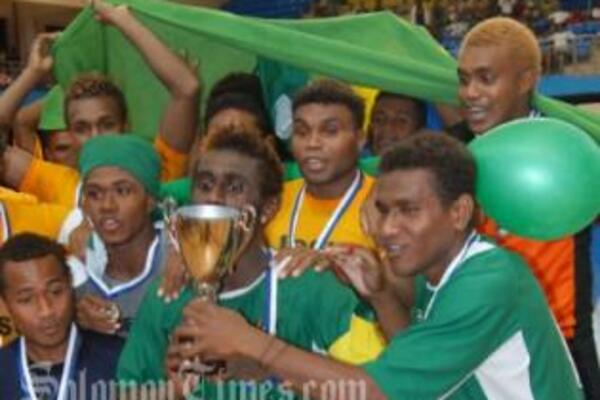 The Kurukuru national futsal team held a solemn thanks giving service on Saturday at the Chung Wah School Hall for their recent successful campaign at the OFC Championship in Fiji.

The service was attended by the Kurukuru team members with their family and friends as well as representatives from the Solomon Islands Football Federation (SIFF).

The service was held to give thanks to God for the team's achievement of winning the regional tournament for the second time in a row.

Speaking during the service, the SIFF President, Martin Alufurai, thanked the Kurukuru teams' parents for organizing the service which he said gave all the glory of Kurukuru's successes back to God.

The SIFF president also acknowledged the hard work the team's parents and family had to do to ensure that the Kurukuru boys were always ready for their games.

He said it was the hand of God which led the team to victory in the tough OFC Championship and it was important for the team never to forget God in all they did.

He said being the Oceania region's futsal champion's, the Kurukuru players had to seek God for the strength and will to hold on to their title, something which he said other teams in the region wanted to take from them.

Mr. Alufurai said the Kurukuru team had a special kind of oneness that he hoped to see in other local teams, a oneness which he said ran down to the team's spirit and souls.

He said it was that sense of oneness that allowed them to face challenges as a unit and added that the same oneness was what made them win the recent OFC Championship in Fiji.

Kurukuru will represent Solomon Islands at a world championship in Libya in October this year.