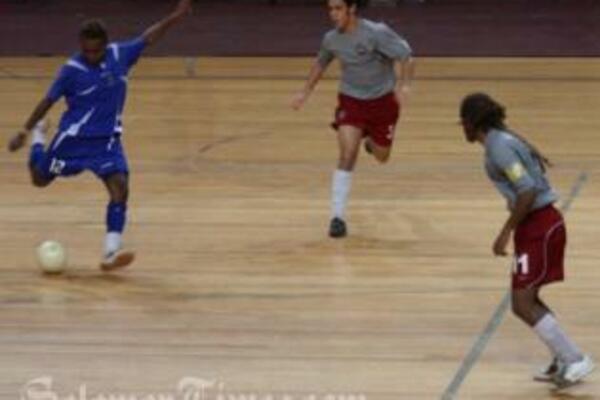 The Solomon Islands has shown its dominance in the indoor soccer code, defeating New Caledonia 8 -3.

With literary hundreds of supporters from the Solomon Islands community in Fiji, the Kurukuru lads came out firing in the first half of the game, scoring within the first 10 seconds of the game from inspirational captain Elliot Ragomo. Another goal quickly followed from Kurukuru, rattling the New Caledonian team.

Unfaded the lads from New Caledonia replied with two quick goals of their own, resorting to high passes and using their relative height advantage. New Caledonia blasted home another goal minutes before half time.

Kurukuru coach, Dickson Kadau, brought in keeper Alick Lioka in the second half and resorted to fast paced football, taking advantage of Kurukuru's superior ball handling skills. The likes of Jack Wetney and the sensational Michael Lea'alafa combined well with Ragomo, scoring almost at will. Five goals in the second half brought joyous cries of "Go Solo Go," with Ragomo and Lea'alafa scoring a brace each, shaking the FMF Dome in Suva and leaving the New Caledonians without much hope of a comeback.

The Solomon Islands Kurukuru is clear favourites going into the second day of matches. They will take on hosts Fiji, who defeated Vanuatu 2-1, 7pm today (SI Time).