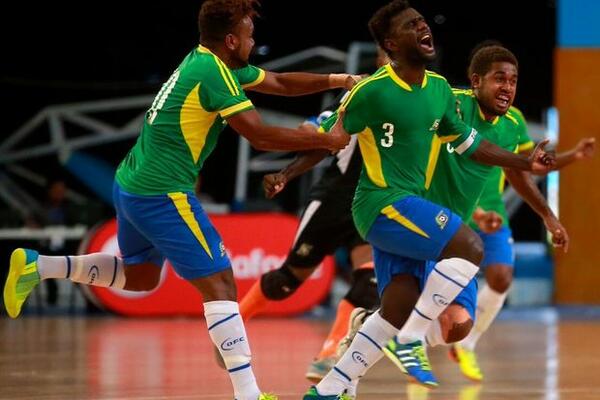 “Whenever a Solomon Islands team plays, we go crazy, because the reality back home is everybody knows who we are. Every single one,” Ragomo said after their 4-2 defeat to Costa Rica.
Source: fifa.com
Share
Monday, 19 September 2016 07:46 AM

It’s hard to overstate the significance for Solomon Islands in having the legacy it does at the FIFA Futsal World Cup.

Colombia 2016 is the third successive tournament for the Pacific nation, but to fully grasp what that means, you need to take a closer look at who they are and where they come from.

Solomon Islands is a cluster of 900 individual islands to the north east of Australia, home to around half a million people stretched over more than 10,000 square miles. There are a small number of larger landmasses, including Guadalcanal island, which houses the capital Honiara. By any standard, a challenging environment to construct any kind of team.

This current Kurukuru squad features a core of players – including captain Elliot Ragomo and FIFA Club World Cup participant Micah Leaalafa – who were among the first generation to really get in touch with the game of futsal. While already football mad, Solomon Islands took quickly to this form of the game, which arrived via missionaries from Australia's Dural Baptist Church during the early 2000s, following a period of civil unrest.

Having put together a team, and performed impressively during trips to Australia, they entered the OFC Futsal Championship in 2008. And won. That bought this bunch of boys in their late teens a first ticket to the Futsal World Cup, at Brazil 2008, and they have been ambassadors for their community ever since – while they are adored in their homeland.

“Whenever a Solomon Islands team plays, we go crazy, because the reality back home is everybody knows who we are. Every single one,” Ragomo said after their 4-2 defeat to Costa Rica. “They’ve followed the story of the Solomons team, they know the reality of this team and last night we gave hope to our country. We lost the game but we won all the hearts back in our country.”

“I know exactly what is going on in the Solomon Islands at the moment,” Brazilian coach Juliano Schmeling added. “They give hope to the community there. They give a reason for everyone to keep going and playing. For the Solomons community it is an honour to come to the World Cup.”

This passion has captured the hearts of fans in Colombia, seeing the enthusiasm the Kurukuru play with when faced with seemingly impossible odds, like against the CONCACAF champions or Copa America holders Argentina. “We gave everything, like it was the last game of our lives,” Ragomo said of the latter match. “With these boys, even if we lose, it feels good to play against one of the best teams in the world and keep fighting, fighting, fighting until the end.”

The disparity in resources was all the starker when they faced La Albiceleste. "We are coming from a very challenging country when you talk about high performance, it’s so hard to compare,” Schmeling explained. “The players have one meal per day, no shoes, no futsal court, no balls. This is a big challenge and pride is the first feeling I have towards the players.”

Helping give Solomons the environment to grow further is the next step, with Schmeling having to reform the team into a unit following just a couple of tournaments since leaving Thailand in 2012 and trying to reach Colombia two years later. On top of that, the natural climate is a consistent challenge – the official cyclone season lasts five months of the year. But the appetite for football is insatiable.

“In our work in Oceania, it’s always a pleasure, because you can feel that it is an organic football environment,” Paul Toohey, OFC Futsal Development Officer explained. “When you go there everywhere you look there’s kids playing informal games, it’s very pure. They love football. It’s a huge part of the fabric of life there. Speaking to people like Juliano, who come from these strong football countries, when they go they feel it too.”

And with the impact they have had in Colombia, the hope is that the momentum can help bridge the gap to the facilities - or lack thereof - preventing growth. “Hopefully that will be the legacy of this campaign and the momentum generated by such a successful campaign will really help get the futsal court project across the line.

“If they have a national futsal centre, training and competition at all age groups – for boys and girls – will be something everybody can feel good about.”

“It’s a big lesson for everyone in the world,” Ragomo believes, “because nothing is impossible, you can just keep going, and whatever happens after this World Cup, we will keep going, whatever comes our way.”