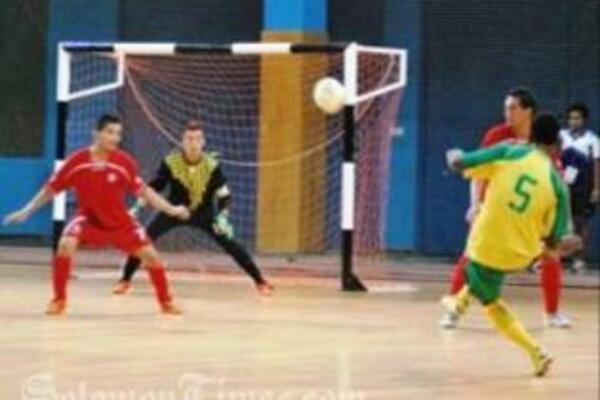 The result means the Solomon Islands have now qualified for the next stage.
Source: Photo Supplied
Share
Wednesday, 18 May 2011 08:53 AM

The Kurukuru have joined Vanuatu in making it through to the semi-finals of the OFC Futsal Championship after eventually edging out a determined Tahiti outfit 1-0.

Tahiti, who put on arguably the finest defensive showing at the tournament so far, frustrated the Kurukuru side who committed simple errors and several chances went begging.

Although they still finished up on the wrong end of the scoreline, the magnitude of the Tahitians' effort in keeping such an accomplished side to just one goal was evident at the final whistle when those in red celebrated the result as if it was a win.

The Kurukuru had dismantled Tahiti's francophone rivals New Caledonia 13-5 yesterday but it was clear from the outset that the run of play would not go as much in their favor.

With goalkeeper Teva Durot in inspired form, it looked like Tahiti had done enough to go into the sheds on level terms but Micah Lea'alafa ensured that wouldn't be the case when, to the delight of the fanatical Kurukuru fans crammed inside Vodafone Arena, he swept home a pass from captain Elliot Ragomo in the 19th minute.

The second half followed a similar pattern to the first, the Kurukuru enjoying most of the ball and putting pressure on the Tahiti defence but they could not find a way through as Durot pulled off a string of fine saves.

"We played very well in defence but the final result is not good for us. We have not qualified yet and need to concentrate on our next match, which will effectively be a quarter-final. We have a lot of pressure on us to win after our beach soccer side qualified for the World Cup earlier this year. Second or third will not be acceptable. The Solomon Islands are a very good side but our beach soccer team has reminded us that anything is possible," said Tahiti coach Heitapu Hunter:

The result means the Solomon Islands have now qualified for the next stage while the outcome of the Tahiti-New Caledonia match tomorrow will decide who joins the Kurukuru in going through from Group B.

"The result may not have been good but it is another win and we will build on this. Tahiti are a very good defensive side, they have some size and were very committed in their defence today. I will be resting some of the players against Tuvalu as we focus on the knockout stage," said Solomon Islands coach Dickson Kadau.