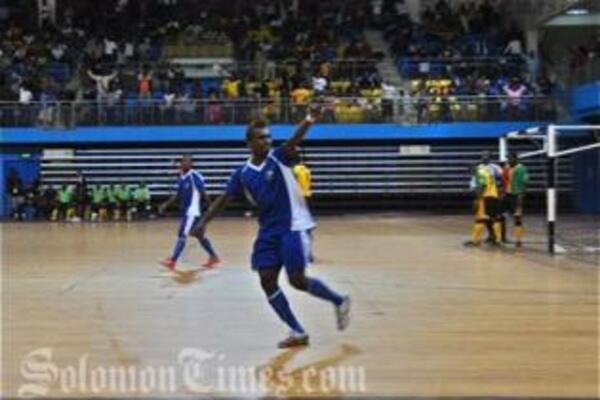 Kurukuru captain Elliot Ragomo may have been out of action on day four of the OFC Futsal Championship but the Solomon Islands still poured on the goals beating Vanuatu 8-3.

The inspirational Ragomo had to sit out the match due to suspension but Michah Lea'alafa stepped up to score a hat-trick and take his tournament tally to nine.

The favourites remain at the top of the table equal on points with hosts Fiji but with a superior goal tally of plus six.

Jack Wetney put the favourites ahead in the sixth minute after rounding the goalkeeper and slotting home from a tight angle.

The tournament's leading goal scorer Lea'alafa doubled the lead two minutes later before Vanuatu settled into the game with a more structured defense.

Coleman Makau then scored just before the break to give the Solomon Islands a three-goal cushion going into the break.

The Kurukuru hit their stride in the second period, entertaining the 2000 plus crowd with plenty of ball skills.

Lea'alafa was particularly impressive while Wetney showed some magic footwork to round the keeper yet again for his second and the team's sixth.

But lack of concentration cost the Kurkuru at the end with Vanuatu scoring two in the dying stages through Nemani Roqara and Ben Hungai while an unfortunate own goal made it three for Marcellino Barthelemy's side.