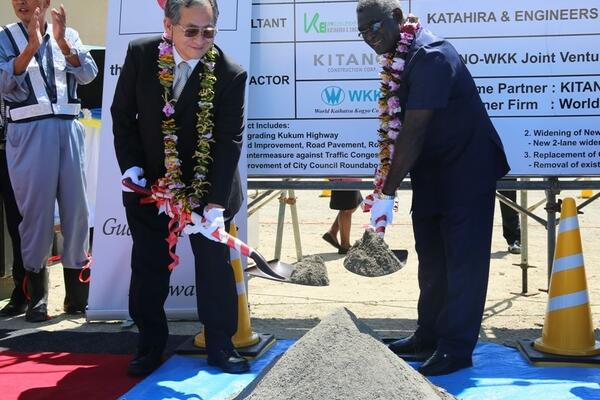 A major infrastructure improvement project in Solomon Islands financed by the Government of Japan is projected to improve economic activities by reducing the current traffic conditions while improving safety for road users in the capital, Honiara.

Prime Minister Manasseh Sogavare and Japanese Ambassador to Solomon Islands Kenichi Kimiya launched the construction phase of the Kukum Highway Project after the recent conclusion of the Preparatory phase.

The Project addresses one of the top priority Transport Infrastructures in Solomon Islands because of its significance in connecting various important services and economic activities in and outside of Honiara City.

The current traffic congestions and the poor road conditions encountered daily have been continually blamed for the untimely attendance to work by most employees in the City by significantly reducing their productivity.

“There is now hope on the horizon with the Kukum Highway Upgrading Project entering into its Construction Phase and for this, a “Big Thank You for the Government and People of Japan for their generous Grant Assistance for the Project,” Prime Minister Manasseh Sogavare said at the groundbreaking event on Wednesday.

The Kukum Highway is the only connection between East and West Honiara linking the International Air and Seaport that facilitates economic developments, industry, commerce, tourism and other essential services in Solomon Islands.

The highway is also important for the Guadalcanal Plains Palm Oil Limited operations, Gold Ridge Mine development, Tina Hydropower Development, the Ranadi Industrial area, and the many commercial activities and investments in and around the City of Honiara.

The Highway has become one of the most important infrastructures that has through the years, been supporting economic investments, activities and operations in and around Honiara City as well as further West and East of the City.

In 2013, the Government of Japan responded positively to a request from the Solomon Islands Government with a dispatched team of Surveyors to identify the causes of the traffic congestion and to propose the Project Components.

Construction of the multi-million dollar project is expected to start immediately.