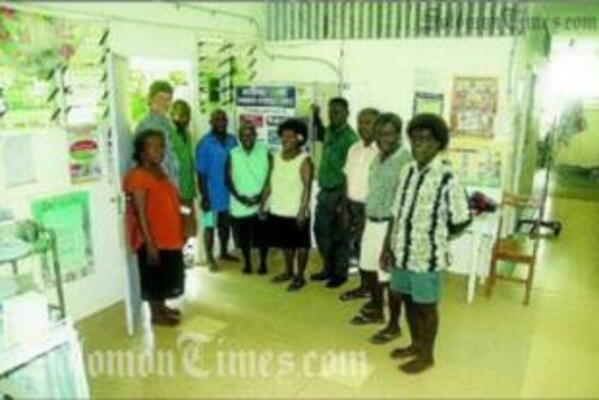 Peter Clement and his wife Kerrie simply could not ignore the plight of the people of Kukudu in the western province of the Solomon Islands when the couple spent five weeks there as part of a voluntary medical mission in 2009.

Just like the rest of Kukudu (pronounced Koo-koon-doo), the medical clinic in the remote village could only access power for three hours per day thanks to a generator.

So after conducting training with local villagers during their stay Peter, a Grafton ambulance paramedic, and Kerrie, a clinical coder at Grafton Base Hospital, headed home with a new mission in mind - to help solve the Kukudu clinic's power woes.

Grafton businesses jumped on board and before long a power supply unit was built. It housed two large batteries, a power inverter and a charging system.

The unit, Peter said, was valued at $8000 retail but, thanks to the generosity of local businesses, only $2000 was needed and this was raised through various fundraising efforts.

Blanchards Transport jumped on board and freighted the unit to Sydney for free.

And here the good fortune continued.

Sydney electrician Brett Partridge was on his own mission to help the Solomon Islands. He was filling up a container with various pieces of equipment that he was planning on installing on the Solomons and included the Kukudu-bound unit for free - he even installed it last month when it arrived.

Peter, a Seventh Day Adventist, said he thought there was more than luck on his side.

"When we got there, we were overwhelmingly popular - the people had never seen anything like it - it was the best power unit in the western province," he said.

"They held a farewell dinner for us, put lais around our necks and gave us a carving saying we were honorary Solomon Islanders.

"In their world the unit is like a $60,000 donation - that's how unachievable it would have been.

Peter said the new power unit opened doors for the clinic and a powered microscope would help with the diagnoses of malaria - a major problem in the area.

Next Peter and Kerrie are looking to equip the clinic with hospital beds, blood pressure cuffs and other medical equipment.