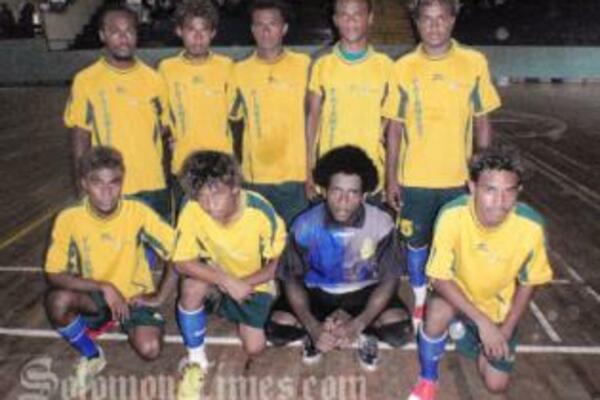 KOSSA were crowned the new champions of the Honiara Futsal League after beating defending champions Brisolona 4 - 2 yesterday at the Honiara Multipurpose Hall court.

It was a sweet victory for the Jack Wetney led side who were the better than their opponents in all areas of the game. Brisolona clearly suffered from the absence of captain, Elliot Ragomo, who has moved to Australia to play his trade in the New South Wales futsal league.

The game opened to a typical finals encounter where both sides struggled to gain their composure in the initial stages of the game. Brisolona were the first to make a breakthrough but Stanley Puirana's effort just went past the right post. KOSSA were quick to regroup and Jack Wetney was their star of the day displaying the skill and maturity that has made him a World Class futsal player.

A lapse in the KOSSA defence allowed Brisolona to go 1 ahead with an accurately timed placement from rising star Matthias Saru. KOSSA were quick to get back in the game and it was Sammy Osifelo who drove in a powerful shot that Alick Lioka could not save.

It was clear who was the difference in the game as Jack Wetney started to control the flow of the ball for KOSSA and making sure that his side had more opportunities in the game.

Matters were made worse for Brisolona minutes later when Micah Lea'alafa added the second goal for KOSSA. Lea'alafa scored again before the referee called for the half time break.

In the second half Sammy Osifelo struck again to put KOSSA 4 - 1 out in front and left Brisolona in a desperate situation trying to salvage their game that was falling apart. Brisolona hopes were rekindled when Matthias Saru bagged his second of the match.

Brisolona then won a penalty but Jenan Kapu failed to convert and this pretty much summarized the Brisolona effort for the day. They had the skills and know how but they just could not find the right tempo.

When the final whistle came the KOSSA side who looked more confident and resolved throughout the game celebrated with cheers and the Brisolona boys were quick to congratulate their opponents. It was a fast and action filled game but as always in a final one team had to win and yesterday was KOSSA's day.

Earlier in the afternoon Honiara Futsal was rocked when Koloale failed to turn up for the third and fourth playoffs against Marist. Marist did the ceremonial lineup and was awarded a win by default against Koloale who lost the semi finals play off by 8 to 2 against Brisolona.

The Honiara Girls U-14 Championship final was played earlier in the day in a contest between Bokz and Hurricanes. The match was won by the Hurricanes.

The Honiara Futsal League began in August this year with a total of 32 teams. Interest in Futsal both from young men and women is high in the capital and plans are in place for a senior women's league to be held next year in conjunction with the men's senior league.