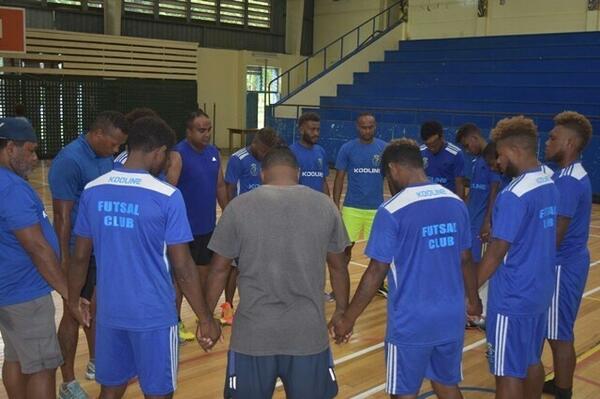 OFC Futsal Champions League-bound, Kooline futsal club is in positive chi to represent the country at the inaugural competition in Auckland, New Zealand.

“Kurukuru has shown the way forward in the game. They have done their part representing the country, and as for us we also want to achieve our goal, not just to participate but to compete,” the former Kurukuru player and national U17 futsal coach said.

Puirana is banking on the experience of his five national futsal players in the team, to lead Kooline, following their recent triumph at the OFC Nations cup.

“I have five national players in my squad; two of them already have competed at the FIFA Futsal World Cup, and with their experience, it’s an extra bonus for the team.

“The players’ inclusion has had a big impact, especially for my young inexperienced ones.

“We were only together for the past two weeks since the return of the players following their qualification campaign. We still have time to prepare and work with our combination,” the Puirana admitted.

The men in sky blue will take on Tahiti’s AS Pirae in the tournament’s opener and Puirana having once experienced the Tahitian defensive play as a player is already working on his attacking options.

“We are working on tactical areas, especially attacking,” he said.

Kooline Futsal Club is backed by Coral Sea Casino as their major sponsors going in the competition.

The Championship will be played in a single round-robin format with the top two teams qualify to the grand final on Sunday 8 December.

Meanwhile, the Stanley Puirana final Kooline squad for the 2019 OFC Futsal Club Championship is as follows: