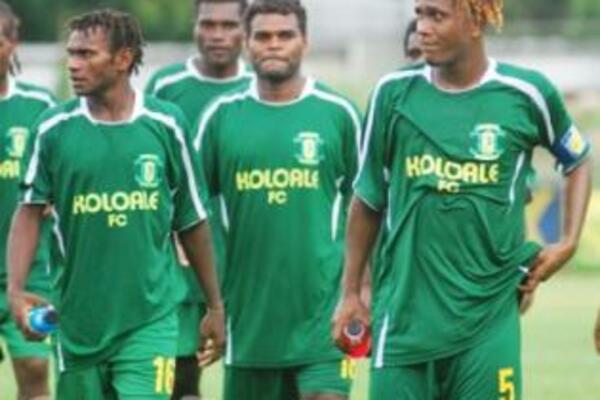 Will Koloale march on or will Marist break their stride?
Source: STO Archives
Share
Wednesday, 10 June 2009 10:40 AM

The much anticipated finals of the Telekom Club Championships will be played out today at the Lawson Tama stadium with Koloale taking on Marist.

Both teams have an array of young talents with the likes of Abraham Iniga and Michael Taeman for Marist and Henry Fa'arado (Jr) and Richard Anisua for Koloale. Both sides have speed, skill and the ability to score. The one thing that will most likely become the ultimate decider is composure. The team that maintains its composure and plays 'cool running' football will win the game. There is a lot at stake and players of both teams, whether they are conscious of it or not, can be overwhelmed with such high expectations from fans. The past could also be their enemy, memories of past losses and victories could place them under unnecessary pressure.

Maintaining composure in a full game of soccer comes with experience, and that, in our assessment, is where Koloale has a huge advantage. Koloale has been impressive throughout the league and have roughed it up with the big guns of Oceania before bowing out in the finals. Koloale is an impressive young side and they have proved, with their draw with Auckland FC of New Zealand in their return match that they have learnt a great deal from their mistakes. On top of their game Koloale would be a difficult side to beat, but, as stated earlier, it may well come down to 'cool running' football.

'Cool running' football is just resorting to the basics of soccer - basic passes, basic set ups, basic footwork will all lead to glorious goals. We predict a 2-0 win for Koloale but are always ready to eat some humble pie!