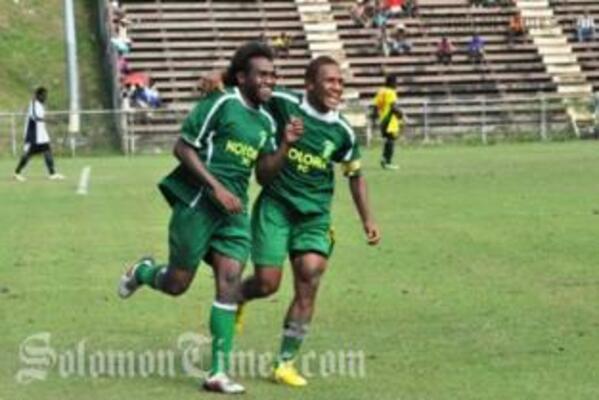 Koloale pulled off a brave come back in the second half of their quarter final match against Marist to win it by 3 - 1 after trailing by one goal at half time.

The match will be remembered as the coming of age of many young players from both teams as they rose to take over the mantle from some of the former big names. The stars of the match were Koloale's Ian Paia, Francis Lafai, Steve Saru and Marist's Tutizama Tanito, Ben Hibiscus and Michael Oiramo.

Marist went ahead after just 1 minute after winning a penalty. Michael Misitana took the first shot but it was blocked by the Marist goalkeeper. Fortunately, Bentley Nalangu was there to make sure they got the worth of the penalty.

In front and in control Marist were looking like the much better side. Koloale were late to overcome their nerves but managed to mount promising attacks on Marist after they settled down.

Marist looked like they were going to extend their lead but fortunately for Koloale they were able to prevent further goals from their opponents. Shadrack Ramoni has never been busier in the tournament and this match certainly brought out the best in him.

As half time arrived the score line was at 1 - 0 in favour of Marist.

Koloale returned in the second half determined to wrestle the game away from their opponents and made the best restart they could have hoped for when Henry Fa'arodo followed up a shot from Paia to kick it into the back of the net after Navusu Kitu failed to fully catch the ball.

Three (3) minutes later Paia got himself on the scoreboard. His jump for Lency Saeni's cross was higher and better timed than the others that competed for the ball and his header was even better.

By now Koloale were back in control and maintained their 2 - 1 advantage while they searched for extra goal buffer. Marist suffered a set back in the 61st minute when left defender Sam Bino was red carded after being cautioned twice in the match.

Koloale, however, failed to make use of their 1 man advantage until the 81st minute when Benjamin Totori scored their third goal. His goal can be considered as one of the best in the championship after brilliant dribbling saw him beat 3 Marist defenders to score from inside the 18 yard box.

The full time score of 3 - 1 was enough to take Koloale through to the semi finals where they will meet the winner of the match between KOSSA and Northern United.