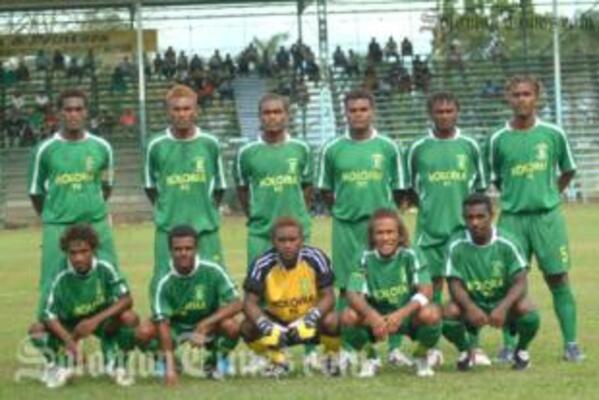 Sweet victory for the Koloale side, they now await the winner of the Auckland City versus Waitakere United match up.
Source: Photo Supplied
Share
Monday, 30 March 2009 10:24 AM

Koloale's dream of featuring in the Oceania League final was finally realized on a wet Saturday afternoon as they beat Fiji soccer giants Ba by the narrowest of margin, 1-0 at Lawson Tama Stadium.

Koloale adapted well to the wet and slippery ground condition caused by heavy downpour in Honiara and held on to their first half lead to clinch the win and secure a spot in the O League final.

The 4R Electric Ba side started well but lost their momentum midway in the first spell allowing the opponents to settle and connect with their passes.

Koloale opened its account in the 34th minute through a Henry Faarodo freekick which was nodded into the back of the net by striker Nicholas Muri after Ba goalkeeper Jone Ralulu failed to contain the shot.

Koloale led 1-0 at the breather.

Ba came out attacking in the second half but excellent goalkeeping by nippy goalkeeper Shadrack Ramoni denied striker Osea Vakatalesau the chances to nail the equalizer.

Josaia Bukalidi did not have a good day in the field as he time and again failed to connect with the crosses from midfield and wasted opportunities upfront.

Midfielders Ronil Kumar and Malakai Tiwa also had a quiet match as they were marked well by experienced players like Henry Koto and Faarodo.

While Koloale waits for the winner of the Auckland City versus Waitakere United match which will be played on April 5, Ba heads back home with the hope that they win the first round of the National Soccer League again this season and qualify for the O League competition for next season.