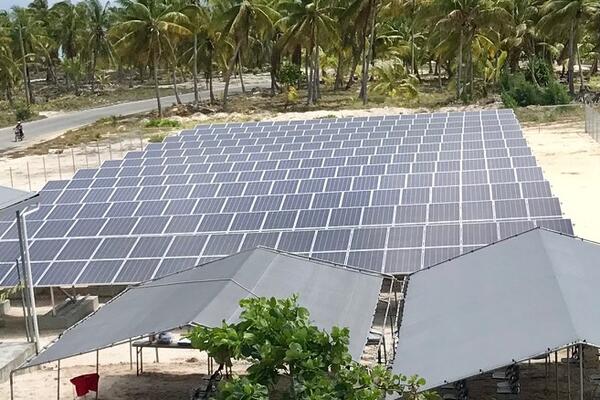 The project will bring affordable, reliable, and clean energy to people in the remote Malaita, Makira/Ulawa, Sasamunga and Western Provinces, along with significant economic and social gains.

Infratec Chief Executive Greg Visser says the project is about providing electricity and infrastructure on outer islands that currently have limited or no power.

The project is funded 50/50 by the New Zealand Ministry of Foreign Affairs and Trade (MFAT) and Solomon Power.

“Their goal, and ours, is to realise the economic and societal benefits of renewable energy for the people of the Solomons,” Greg Visser says.

“While the Solomon Islands have renewable energy resources including geothermal, hydro, solar, ocean, and biomass, most of these have not yet been tapped; the country remains almost entirely dependent on imported petroleum fuels, providing 95% of electricity generation,” he says.

“Energy costs in the Solomons are amongst the highest in the world and the highest in the Pacific. The high cost of electricity and the limited reach of the distribution grid are slowing economic growth and hampering community development.”

Sunergise Chief Operating Officer Bruce Clay says, “We are looking forward to working with Solomon Power and MFAT in providing sustainable electricity access to the rural communities of the Solomon Islands.”

The project will bring reliable power to more than 1000 homes as well as hospitals and health clinics, small businesses, schools and vocational training centres.

That means better health services due to lighting in clinics and improved ability to store vaccines, improved education outcomes due to lighting and communication services in schools, improved security due to public lighting, increased economic activity such as small businesses generating additional income and employment opportunities during the project construction stage, and increased empowerment of women, who receive proportionally higher benefits from increased access to energy.

About 35 people will be involved in the design and construction of the four power plants, including about 15 jobs for local people on the ground in the Solomons. The JV partners have committed to employ people from the local communities for the construction phase wherever possible, with a focus on opportunities for women.

They have also committed to work with local communities to deliver a programme to help reduce the incidence of sexually transmitted infection and diseases, in particular HIV and Aids.

“This is the kind of work we love to do, for the good of communities, people and the planet — our projects are always about environmental sustainability and community health and wellbeing, not just the mechanical components,” Greg Visser says.

The project design stage is beginning straight away and the JV partners expect the first plant to be operating around July next year, with many of the community benefits felt much sooner than that.