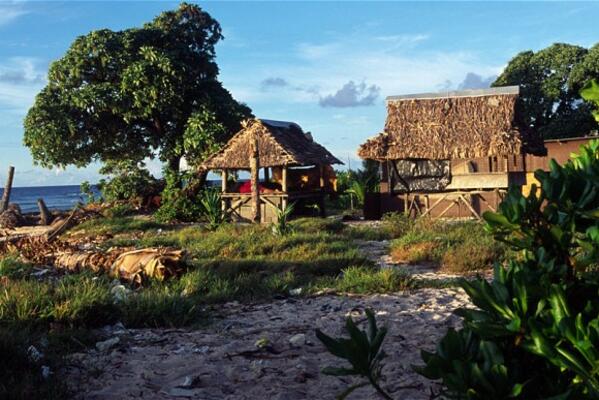 Tidal gauges indicate the world's oceans have been rising at an annual rate of 3.2 millimetres (0.1 inches) since 1970. Many scientists expect that rate to accelerate and for climate change to trigger more intense storms, which may pose an even more pressing threat to many of the world's low-lying islands.
Source: Photo supplied
By Associated Press
Share
Thursday, 03 October 2013 10:30 AM

A man from one of the lowest-lying nations on Earth is trying to convince New Zealand judges that he's a refugee - suffering not from persecution, but from climate change.

The 37-year-old and his wife left his remote atoll in the Pacific nation of Kiribati six years ago for higher ground and better prospects in New Zealand, where their three children were born. Immigration authorities have twice rejected his argument that rising sea levels make it too dangerous for him and his family to return to Kiribati.

So on Oct. 16, the man's lawyer, Michael Kidd, plans to argue the case before New Zealand's High Court. Mr Kidd, who specialises in human rights cases, told The Associated Press he will appeal the case all the way to the country's Supreme Court if necessary.

Legal experts consider the man's case a long shot, but it will nevertheless be closely watched, and might have implications for tens of millions of residents in low-lying islands around the world. Kiribati, an impoverished string of 33 coral atolls about halfway between Hawaii and Australia, has about 103,000 people and has been identified by scientists as among the nations most vulnerable to climate change.

In a transcript of the immigration case obtained by the AP, the Kiribati man describes extreme high tides known as king tides that he says have started to regularly breach Kiribati's defenses - killing crops, flooding homes and sickening residents. New Zealand immigration laws prevent the AP from naming him.

The man said that around 1998, king tides began regularly breaching the sea walls around his village, which was overcrowded and had no sewerage system. He said the fouled drinking water would make people vomit, and that there was no higher ground that would allow villagers to escape the knee-deep water.

He said returning to the island would endanger the lives of his two youngest children.

"There's no future for us when we go back to Kiribati," he told the tribunal, according to the transcript. "Especially for my children. There's nothing for us there."

The man's lawyer said the family is currently living and working on a New Zealand farm.

Last week, an international panel of climate scientists issued a report saying that it was "extremely likely" that human activity was causing global warming, and predicted that oceans could rise by as much as 1 metre (3.3 feet) by the end of the century. If that were to happen, much of Kiribati would simply disappear.

Though that is a dire prospect, New Zealand's Immigration and Protection Tribunal has said it is not one that is addressed by laws dealing with refugees.

In a decision recently made public, tribunal member Bruce Burson said the legal concept of a refugee is someone who is being persecuted, which requires human interaction. He said the tribunal rejected the man's claim because nobody is persecuting him.

The tribunal found there was no evidence that the environmental conditions on Kiribati were so bad that the man and his family would face imminent danger should they return. Mr Burson said the man's claim was also rejected because the family's predicament was no different than that faced by the wider population of Kiribati.

In his court appeal, Mr Kidd said the fact that many people face the same threat is no grounds to dismiss a claim. He also argued that his client did suffer an indirect form of human persecution because climate change is believed to be caused by the pollution humans generate. He said his client also would face the threat of a climate-induced breakdown in law and order should he return.

Bill Hodge, a constitutional law expert and associate professor at the University of Auckland, said he applauded Mr Kidd's "ingenious arguments" but didn't think they would succeed because his client hasn't been singled out and victimised due to something like his gender, race or political persuasion.

But Professor Hodge added that even if the Kiribati man loses, his case might make a good argument for expanding the definition of what constitutes a refugee. He said he expected there would be increasing pressure on nations like New Zealand and Australia to help provide new homes for Pacific Islanders threatened by rising seas.

Tidal gauges indicate the world's oceans have been rising at an annual rate of 3.2 millimetres (0.1 inches) since 1970. Many scientists expect that rate to accelerate and for climate change to trigger more intense storms, which may pose an even more pressing threat to many of the world's low-lying islands.

Kiribati's government is pursuing its own strategies. It has paid a deposit for 6,000 acres in nearby Fiji, which Kiribati President Anote Tong has said will provide food security and a possible refuge for future generations. The nation has also been talking with a Japanese firm about the possibility of constructing a floating island, which would cost billions of dollars.

Rimon Rimon, a Kiribati government spokesman who said his opinions on the matter were his own, said he thought the man in New Zealand was taking the wrong approach. He said the government is working hard to train people in skills like nursing, carpentry and automotive repairs so that if they do leave Kiribati, they can be productive in their adoptive countries.