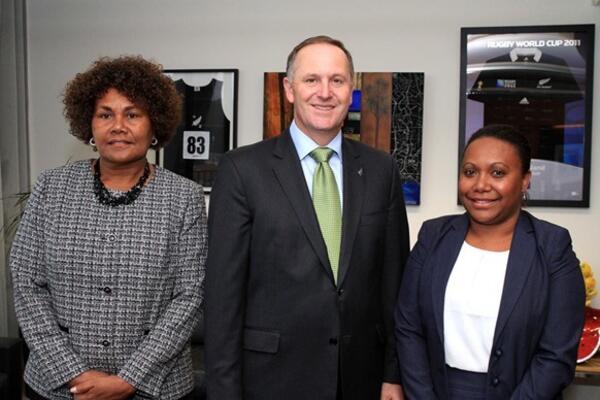 High Commissioner Kere’s meeting with Prime Minister Key marks the beginning of her formal engagement with the government of New Zealand.

The brief presentation ceremony at the Prime Minister’s Office was witnessed by Ms Fiona Indu from the Ministry of Foreign Affairs and External Trade together with officials from the New Zealand Government.

High Commissioner Kere during her Commissioning in Honiara last month pledged to fulfill her assigned responsibilities as expected by the Government and people to ensure Solomon Islands benefit from its representation in New Zealand.

Mrs Kere is Solomon Island’s first ever female High Commissioner to head a foreign mission abroad and was a career civil servant who served the government in various ministries over the years.

She was permanent secretary to the Ministry of foreign Affairs and External Trade prior to her appointment as High Commissioner to New Zealand.

The Government in January this year opened a new Mission in Wellington to fulfill the country’s foreign relations policy of broadening its presence abroad as well as enhancing relations with a close Pacific neighbor and developing partner-New Zealand.

Solomon Islands ongoing relations with New Zealand are based on ties established even before 1978.