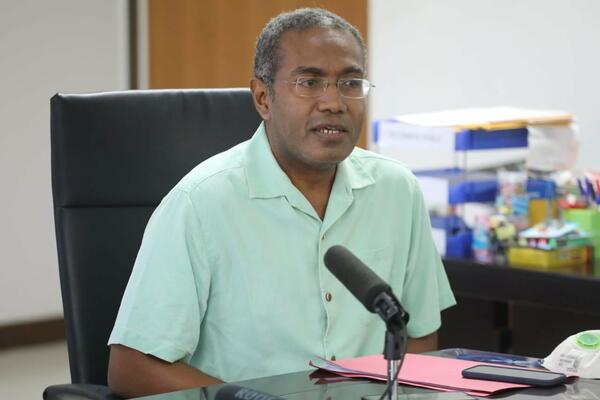 Hon. Kenilorea said consultations must be nationwide and this agenda should not be bulldozed for self-interests.
Source: Supplied
Share
Friday, 11 March 2022 13:03 PM

The Opposition Group understands that the government is continually pushing to extend the life of Parliament from 4 to 5 years under the radar.

The Opposition also understands that government arguments include needing more time to implement government policies and reforms and the Pacific Games 2023.

Hon. Kenilorea was responding to questions by the media in a press conference yesterday.

He explained in any democracy, election cycles should never be mixed with government policy.

“Election cycles are separate. In any healthy democracy, regular, free and fair elections are very important. We should never go down that road,” he said.

The East Are’Are MP likened the government’s intention as playing a soccer match and pleading with the referee for more additional time on top of the normal game time.

Hon. Kenilorea said consultations must be nationwide and this agenda should not be bulldozed for self-interests.

Meanwhile, the Opposition Leader Hon. Matthew Wale said the law is very clear and that elections must happen next year.

He said there are no substantive grounds to extend Parliament an extra year.

“And for the Prime Minister and Cabinet to think that granting themselves an extra year is an excuse to make things happen is imprudent,” Hon. Wale said.

The Opposition Leader said the country’s system of government is constitutional parliamentary democracy, representative democracy, government by consent in which people consent leaders to represent them.

Hon. Wale said the assumption and spirit behind the government’s proposed plan that the amendment should be welcomed by the people is selfish and self-serving.