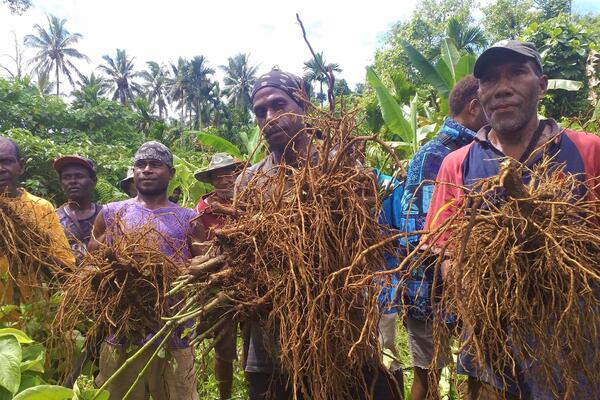 He says that in 2018 kava production on Guadalcanal was 1.2 metric tonnes, compare that to other provinces like Isabel which recorded 12 metric tonnes during the same period.
Source: Supplied
By Jimmy Nolan
Share
Tuesday, 22 September 2020 14:21 PM

Wotomaru says that his division is targeting various local farmers on Guadalcanal, particularly those on the highlands with sizeable land and are willing to plant.

To start with Wotomaru says his division is targeting local kava farmers from Vatupuku on the high lands of Guadalcanal.  He say they will receive some assistance and advise because of its location - ideal for mass planting of kava.

He says they are currently targeting 100 farmers on Guadalcanal, once identified they will train them to start their own kava farm.

Mr Wotomaru says that there are certain standards that buyers require, and such requirements will be passed on during training – this starts from planting, harvesting, and processing.

Mr Wotomaru says that there is potential for kava production on Guadalcanal to grow – but a lot needs to be done.

He says that in 2018 kava production on Guadalcanal was 1.2 metric tonne, compare that to other provinces like Isabel which recorded 12 metric tonnes during the same period.

Mr Wotomaru says he is focusing on assisting and expanding kava farmers on Guadalcanal and is targeting 7 metric tonnes within the next two years.

He says that to reach such production levels more trainings and assistance will have to be made, monitoring and quality checks are also important.

He encourages youths on Guadalcanal to get into kava farming as it is high in demand, both locally and overseas.