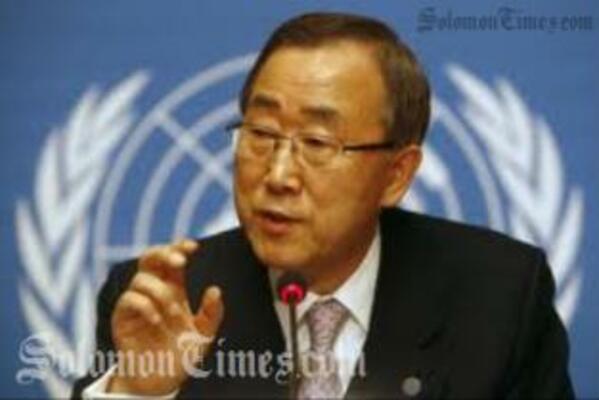 Pacific Island Forum (PIF) Leaders and the Secretary-General of the United Nations (UN)met on 7 September 2011 during the 42nd Pacific Islands Forum in Auckland, NewZealand.

At their meeting, PIF Leaders acknowledged the valuable contribution made by the UN system in the Pacific, and welcomed the first ever attendance at the PIF by Secretary-General of the UN.

The Secretary-General congratulated PIF Leaders on the 40th Anniversary of theestablishment of the PIF, and acknowledged the key role it plays in promoting sustainable development, environmental protection, good governance and peace andsecurity through regional cooperation in the Pacific.

The Secretary General welcomed the focus at this year's PIF on sustainable economicdevelopment.

During the discussions, the PIF Leaders and the Secretary-General had emphasised the value of cooperation between the UN system and the PIF andits associated institutions, and agreed to consider ways to further strengthenthis cooperation.

They also agreed on the importance of sustainable economic growth in achieving theMillennium Development Goals (MDGs) in the Pacific; and discussed ways of enhancing the work of United Nations system in the region to support these efforts, including the possibility of utilising the MDG Acceleration Framework to help identify national priorities for action in each Pacific island country.

The discussed key challenges facing the Pacific region and stressed the role of the UN system in assisting Pacific island countries to address these challenges,including through alignment of its programmes with the objectives and prioritiesestablished in the national sustainable development strategies of Pacific island countries and under international and regional frameworks including theBarbados Programme of Action (BPOA), the Mauritius Strategy, the IstanbulProgramme of Action (IPOA) and the Pacific Plan.

They also stressed that climate change and ocean acidification remained the greatest threat to the livelihoods, security and well-being of the peoples of the Pacific;and reaffirmed the need for urgent international action to reduce emissionscommensurate with the science and associated impacts of climate change andocean acidification on the most vulnerable Pacific communities and peoples.

They emphasised the need for an ambitious reduction of greenhouse gas emissions sufficient to enable the survival and viability of all Pacific Small IslandDeveloping States (SIDS), and for the UNFCCC COP17 in Durban to deliver acomprehensive outcome consistent with this objective.

They also stressed the need to address in all relevant international fora, including but not limited to the UNFCCC, the General Assembly and the UN Security Council, the urgent social,economic and security threats caused or exacerbated by the adverse impacts ofocean acidification and climate change, including the implications of sea levelrise for the territorial integrity of Pacific SIDS and their continued existence asviable dynamic communities; and welcomed in this regard the recent SecurityCouncil open debate and Presidential Statement on the Maintenance ofInternational Peace and Security: Impact of Climate Change.

They highlightedthe role of the UN system in supporting national, regional and internationalefforts to address these impacts.Stressed the critical importance of the sustainable development, managementand conservation of the region's oceans, coastal and fisheries resources as asource of livelihoods and income for communities, industries and governments,and of enabling Pacific SIDS to enjoy a greater share of the benefits derivedfrom those resources.

They called for such issues, often referred to as the 'BlueEconomy', to figure prominently at next year's UN Conference on SustainableDevelopment (Rio+20).

They urged the international community to tacklethreats to marine ecosystems and work towards integrated oceans managementand a global network of marine protected areas.

They noted the value of enhanced cooperation andexperience-sharing between the two Organizations on conflict prevention,peace-making, mediation, peace-keeping and peace-building, building on positiveexperiences in Bougainville and Solomon Islands.

They also noted a range of other areas in which cooperation between the UN and Pacificstates would support the national priorities identified by PIF Leaders and theBPOA, Mauritius Strategy, IPOA and the Pacific Plan.

These included: enhancing the productive capacity of Pacific SIDS; food security; renewable energy;disaster preparedness and risk reduction, and emergency relief and recovery;non-proliferation and disarmament, including controlling the illicit trade in smallarms and light weapons and negotiation of an Arms Trade Treaty; addressingthe ongoing impacts of nuclear testing in the Pacific; preventing and addressingthe impacts of non-communicable diseases in the region; and promoting goodgovernance, democracy, the rule of law and human rights, and addressingviolence against women.

They agreed on the importance, resources permitting, of ensuring an enhanced UN presence in the Pacific region, including at the country level, to promoteeffective dialogue and cooperation in priority areas of mutual interest,recognising recent steps by the UN system in this regard.

They also reaffirmed the unique and particular vulnerabilities and development needs ofSIDS, and emphasised the importance of enhanced coherence, coordination andresponsiveness in the UN system's support for SIDS.

They then stressed the importance of regular high-level dialogue, and agreed to convene meetings between the Secretary-General of the UN and PIF Leaders at regularintervals, beginning on the margins of the opening of the 67th Session of the UNGeneral Assembly in New York in September 2012.