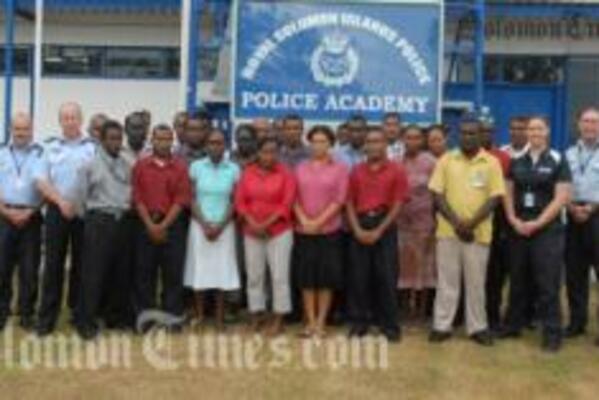 Customs and Immigration participants at the launch of the 2009 Basic Intelligence Course at the Police Academy, Rove.
Source: Police Media Unit
Share
Tuesday, 14 July 2009 10:01 AM

The vital role that RSIPF National Intelligence Unit officers perform will be enhanced by a two-week training course led by two specialist trainers from the Australian Federal Police.

The Participating Police Force is sponsoring the Basic Intelligence Officers' Course - the second to be conducted in the Solomon Islands, the last being in 2004.

Two international trainers from AFP Learning and Development, Jason Stevens and Cassandra Wyer, who are delivering the course, working with PPF advisors.

The pair have recently delivered basic and advanced intelligence courses to the Ministry of Public Security in China, Indonesia, and for the Transnational Crime Unit in Thailand.

RSIPF Assistant Commissioner Crime and Intelligence Jackson Ofu endorsed the involvement of the 25 participants who are developing their information collection and reporting skills during the RSIPF course.

"This course covers the use of intelligence reports in policing and gives officers practice in intelligence collection and analysis to help target organised crime," he said.

Participants must also deliver intelligence briefings to assist in the investigation of fictional crimes in front of an expert panel who will provide feedback on their efforts.

PPF Commander Wayne Buchhorn commended the involvement of the RSIPF, as well as Solomon Islands Customs and Immigration officers in the Basic Intelligence Officers' Course.

"I understand that a new Transnational Crime Unit will soon be working in tandem with the National Intelligence Unit and there will be more opportunities for all agencies to share information and work closely together," he said.

"You will be learning some of the fundamentals of intelligence gathering which will hopefully will lead to good outcomes for the Solomon Islands," he said..

Commander Buchhorn told the group that training and education was "an incredibly important part of what we do as government organisations and as police".

"It is fundamental to intelligence-led policing," he said. "Intelligence-led law enforcement is used as the basis for planning of police operations and helps all agencies to target their activities."

Commander Buchhorn also announced the provision of $150,000 SB by the PPF for a small upgrade of computers and cabling for the RSIPF National Intelligence Unit.

"The Solomon Islands has only one Intelligence Agency and that is the RSIPF's National Intelligence Unit," he said.

"It is important that an effective and efficient intelligence unit provides the service required by the people and Government of the Solomon Islands."