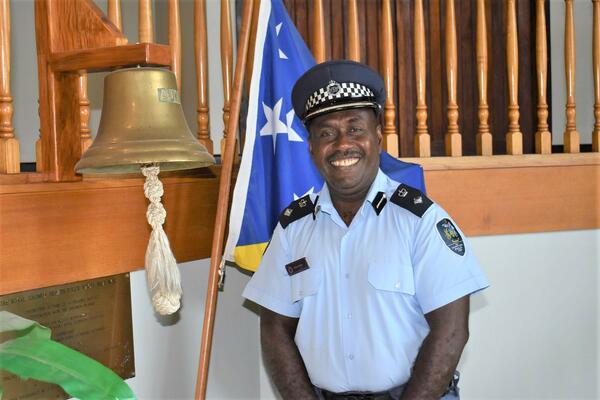 "My classmates and I saw the patrol boat Savo pass by our school down to the border between Papua New Guinea (PNG) and Solomon Islands during the Bougainville crisis. I told my friends at that time that one day, I will become a captain of one of those patrol boats.”
Source: Supplied
Share
Tuesday, 17 August 2021 07:06 AM

“Joining the RSIPF Maritime is a dream come true. The dream started when I was doing my form five at Kukundu School. During that time, my classmates and I saw the patrol boat Savo pass by our school down to the border between Papua New Guinea (PNG) and Solomon Islands during the Bougainville crisis. I told my friends at that time that one day, I will become a captain of one of those patrol boats,” he said.

He continued searching for his dream until 1999 when he graduated with a certificate in basic seamanship at the School of Marine at the then Solomon Islands College of Higher Education after which he joined the Police Maritime Department.

“Captaining one of those patrol boats is not as easy as one may think. There is a need to understand the crews under your command. At the same time, you will have to understand that there are police constables on board and some senior officers like inspectors to deal with the daily running of the boat.”

“Being a parent is another challenge I have encountered as a captain. There are times when I have to be away from the family for a long time. Families’ often face a number of challenges, for example, when a family member is sick, I always ensure that I reach out by communicating with my wife and kids to assist them in handling issues by themselves,” says Captain Reggie.

Captain Reggie flew to Australia last week, as he has been accepted to participate in the Patrol Boat Watchkeeper attachment. This program will allow spending time at sea as part of the ship's company of an operational Australian Navy Patrol Boat participating in Maritime Security Operations. This will enable him to improve his skills and bring back knowledge and experience to improve the conduct of Maritime Security Operation in Solomon Islands.

Captain Reggie will spend about five to six months on the job training with the Australian Navy to further upskill his knowledge in the Police Maritime, as plans are underway to arm the two Guardian Class Patrol boats of the RSIPF.