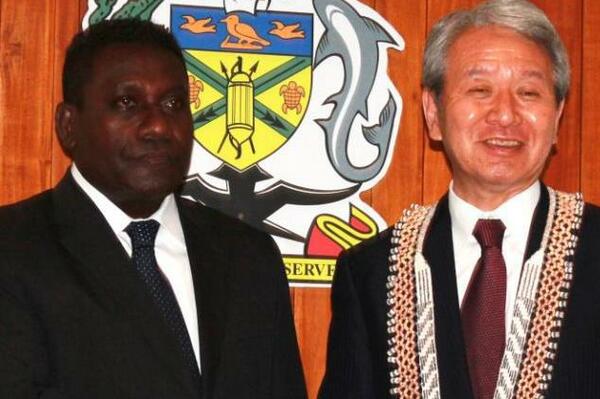 The Prime Minister acknowledge the commitment of the government of Japan through JICA as the implementing agency in developing the national port in Honiara, the road highway in the city and the rehabilitation of the two Mataniko bridges after the recent flush floods that left at least 22 people dead and hundreds homeless.
Source: Government Communications Unit
Share
Thursday, 08 May 2014 07:48 AM

Mr Tanaka is on a two-day visit to Solomon Islands where he will meet with JICA officials, volunteers and government officials.

During a joint press conference, Mr Lilo said he was pleased with the outcome of the meeting, and greatly encouraged by the commitment that the government of Japan has towards developing the infrastructure and assisted in education in Solomon Islands.

The Prime Minister acknowledge the commitment of the government of Japan through JICA as the implementing agency in developing the national port in Honiara, the road highway in the city and the rehabilitation of the two Mataniko bridges after the recent flash floods that left at least 22 people dead and hundreds homeless.

Mr Lilo also acknowledged the JICA volunteers program in Solomon Islands which he noted as greatly contributing to improving lives in the rural areas.

Mr Lilo applauded the success of the partnership between the government of Solomon Islands and JICA which continuous to grow in strength.

“Our sincere appreciation goes to the government and people of Japan for their continuous assistance towards our development aspirations and the encouragement given by JICA in our ongoing development cooperation in the future” he said.

In response, Mr Tanaka expressed his regret at the loss of lives during the April rainstorm and the subsequent flush floods.

He said JICA has provided emergency supplies during the flush floods including blankets, jerry cans and water purifiers as part of the restoration activities.

Mr Tanaka said a mission was dispatched by the government of Japan after the floods which assessed the post-flood situation of the Mataniko River that would enable them to design the two new bridges.

“JICA would like to continuously extend cooperation in the field of Disaster Risk Reduction and Management. We are ready to further contribute to Solomon’s early recovery and reconstruction and to help Solomon Islands be more resilient to disaster”, he said.

Mr Tanaka will also visit the Kukum clinic and the Henderson SIBC Transmitter site during his brief visit. Mr Tanaka and three other members of his visiting delegation will visit the Japanese war memorial monument in Honiara before their departure on Thursday afternoon.