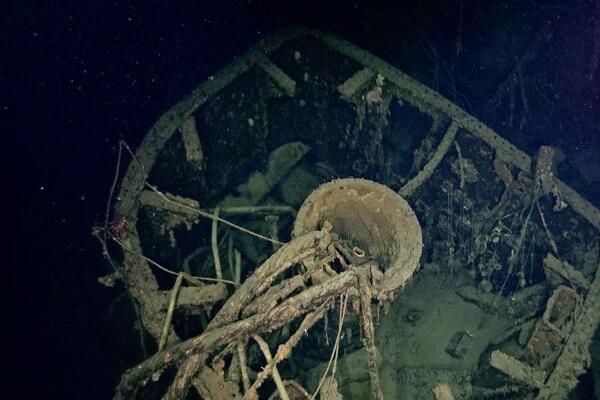 Until this year, the battleship Hiei's exact whereabouts and final moments had remained a mystery.
Source: edition.cnn.com
Share
Tuesday, 19 February 2019 07:14 AM

The first Japanese battleship sunk by US forces during World War II has been found off Guadalcanal, the largest island of the Solomon Islands and the location of fierce battles during the Pacific War.

The battleship Hiei was discovered at a depth of 1,000 meters (3,280 feet) in January by the late Microsoft co-founder Paul Allen's expedition team aboard research ship R/V Petrel.

For decades, Allen committed himself to locating famous shipwrecks, leveraging sonar scanning technology and underwater cameras to confirm their visuals and condition.

Until this year, the Hiei's exact whereabouts and final moments had remained a mystery. But RV Petrel used autonomous underwater vehicles to detect the battleship, which was found upside down.

"This is a really important moment in naval history," Kazushige Todaka, the director of the Kure Maritime Museum in Hiroshima, told CNN. "The discovery revealed where exactly Hiei sank and how an on-board explosion potentially split her in two."

Hiei was built in 1914 at the Yokosuka Naval Arsenal near Tokyo. It was part of a fleet of 11 Japanese battleships active during World War II, according to Takeshi Kubo, a curator at the Kure Maritime Museum. Modeled using British technology, the 222-meter-long (728 feet) warship was equipped with eight 14-inch guns.

Hiei patrolled off the Chinese coast during Word War I and was retrofitted twice -- once in 1929 and a second time in 1936. At 31,000 tons, the Hiei was half the size of Imperial Japanese Navy battleships Musashi and Yamato -- which boasted the largest naval guns ever fitted on a warship at 18 inches in diameter.

Hiei formed part of the escort force for the aircraft carriers that launched the attack on Pearl Harbor, Hawaii, on December 7, 1941, bringing the US into World War II. It sank on November 14, 1942 -- a day after suffering severe damage after engaging American cruisers and destroyers alongside sister ship Kirishima in the Battle of Guadalcanal.

With damage to its steering and power generators leaving it open to the attacks of US dive and torpedo bombers, the crew abandoned ship. Todaka said that of the 1,500 crew members on board, 188 perished during the battle.

On March 2, 2015, Allen's expedition crew announced that it had located the Musashi at a depth of about 1,000 meters (3,280 feet) in Philippine waters. The US Navy sank the Musashi during the Battle of the Sibuyan Sea, part of the Battle of Leyte Gulf in the central Philippines.

"When these battleships are found they provide a moment for us to reinforce the importance of commemorating past events and maintaining peace," Todaka said.