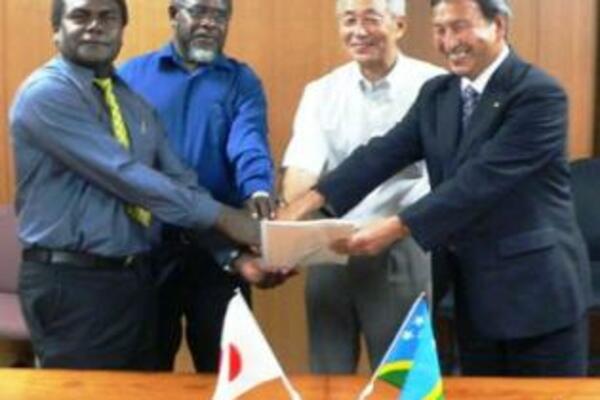 The long-awaited multimillion dollar Auki wharf and market project funded by the Japanese Government will begin at the end of this month, a top government official announced on Sunday.

Under Secretary - technical, Moses Virivolomo, of the Ministry of Infrastructure Development and Malaita Premier Richard Irosaea Na'amo have attended the formal opening of tenders in Tokyo on July 27.

The two top officials represented the Solomon Islands Government at the opening of tenders and witnessed the announcement of the winning tender which was won by Japanese Company, Daiho Corporation to construct the two projects.

The Contract between the Contractor (Daiho Corporation) and Client (Ministry of Infrastructure Development) was signed on 30th July 2010 by Mr Virivolomo in Tokyo.

Construction of the Auki market and wharf will take at least 17 months. The projects approximately cost US$10.5 million including design and supervision costs. The project is scheduled to be completed before 25th December 2011.

"It is a dream come true for my people who have been waiting for such a project over many years," jubilant premier Irosaea said after the signing in Tokyo.

Sea transport is the backbone of the Government's National Transport Plan.

"The new Auki wharf on completion will alleviate the congestion and increase capacity for loading and unloading of passengers and cargo between Honiara and Auki," Mr Virivolomo said on Sunday.

Auki, which is the major trading route in Malaita, has seen increased traffic and value for money from the travelling public through shipping competition in 2010.

An initial plan to start the project in 2009 was halted due the global financial crisis which has effectively escalated the price of construction materials including structural steel in the world market.

The situation has threatened the original project budget. A review of the budget was undertaken by the Japanese Government and JICA in close consultation with Solomon Islands authorities which resulted in necessary adjustments before a re-tender was made earlier this year.
Tenders were opened on 27th July 2010, and Daiho Corporation submitted the lowest price and was invited for negotiations and successfully concluded on 29th July 2010.

Mr Virivolomo sincerely thanked the Japanese Government for its continuous assistance in the Transport Sector by building major infrastructure projects including roads, bridges and wharves in many parts of the country over past years.

He also thanked Daiho Corporation for showing interest and the confidence in entering the construction market in Solomon Islands for the first time and winning the project.

"This introduction of a new player in the market will also provide competition and get us value for money," Mr Virivolomo added.

Meanwhile, the Ministry of Infrastructure development has called on relevant ministries and agencies to assist in fulfilling their obligations on the part of the Solomon Islands Government in seeing land issues sorted out to minimize delays to national projects.