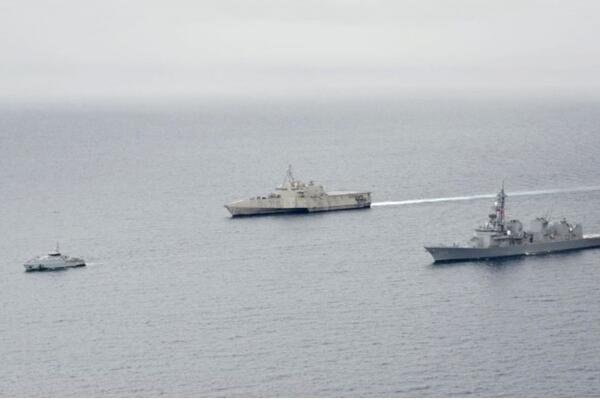 The drill came about amid concerns over China's growing military clout on the South Pacific island nation following a controversial security pact between them.

The MSDF said its destroyer Kirisame, along with the U.S. Navy’s littoral combat ship Oakland, engaged in a maritime security exercise on Monday in the South Pacific with the patrol boat Taro from Solomon Islands' Police Maritime.

With the Solomon Islands having no military force, the Police Maritime effectively functions as such.

The Solomon Islands has denied that the security pact invites China to establish a military base there.

Tokyo and Washington have been stepping up efforts to push back against Beijing's assertiveness in the Indo-Pacific region and to strengthen relations with the Solomon Islands, such as by sending senior officials to the country.

Tensions across the Taiwan Strait have spiked in the wake of U.S. House of Representatives Speaker Nancy Pelosi's visit to Taiwan last week, with China launching a large-scale, live-fire military exercise around Taiwan in response to her trip which pushed through despite warnings.

Beijing sees Taiwan as a breakaway province to be reunified, by force if necessary.
Separately, the Japanese Air Self-Defense Force said Tuesday that it had carried out a joint drill with the U.S. Air Force above waters around Japan's southern island prefecture of Okinawa, near the East China Sea.