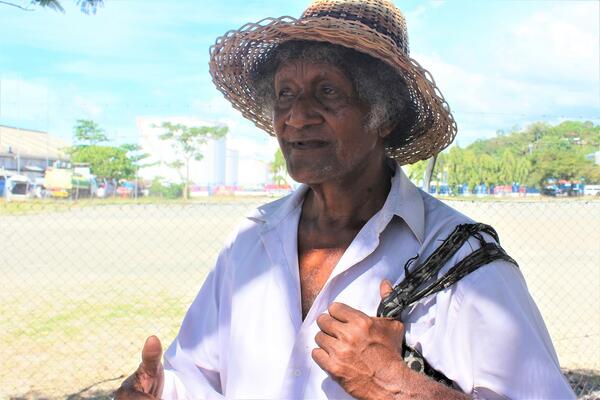 To this date, there is no name formally linked to the designer of the national flag.
Source: STO
By Jimmy Nolan
Share
Friday, 10 July 2020 09:26 AM

You will usually see him along the streets of Honiara in the CBD area. A tall lanky fellow!

Now he has a ministry that spreads the gospel through singing and preaching. He might be quiet but he has a lot to tell when it comes to the country’s independence history.

He is Thomas Giosia. One of Solomon Islands old time artists and musicians!
Under the trees along the commonwealth street is where you will find him singing and sharing the gospel.

Giosia was a graphic artist. He used to work for the government at the Curriculum Development Center from 1966 till 2000.

“I was asked at the last minute to work on the Solomon Islands flag”, Giosia says.

It is understood that in 1975 a competition was organized for submissions of designs for a national flag.

More than 200 designs were said to be submitted at that time.

Four front-runner designs were selected. A design with flying frigate birds surrounded by a gold chain was said to be selected from the four.

The selected design was denounced in the media and said to be meaningless and not accepted. The design was said to be rejected because the frigate bird was a symbol of one Province and not the Solomon Islands.

However, a New Zealander who was a visual arts master at KG VI School from 1974-1978 also claimed ownership of the current national flag design.

"I was an entrant in the 1975 contest to design the new national flag. One of the Solomon Islander judges told me at the time that my design was favoured, but it was preferred that the winner should be a national. I was surprised later; post-Independence, to learn that the adopted national flag was in fact the one submitted in the pre-independence competition by myself," says the New Zealander.

Giosia meanwhile says he was instructed by the Chief Minister at short notice to draft a design of the national flag.

It was widely reported in past documents that a design for the national flag was decided on by Cabinet and sent to Britain for approval in 1976.

To this date, there is no name formally linked to the designer of the national flag.
Giosia now aged 73 says his God given gift and talent has contributed to the country’s history before and after the British colonial days.

"I also designed the country’s old coin and paper money. The one cent to twenty dollars notes. It took me three months to draft before it was approved and finalized”, Giosia says.

The Solomon Islands dollar was introduced in 1977.