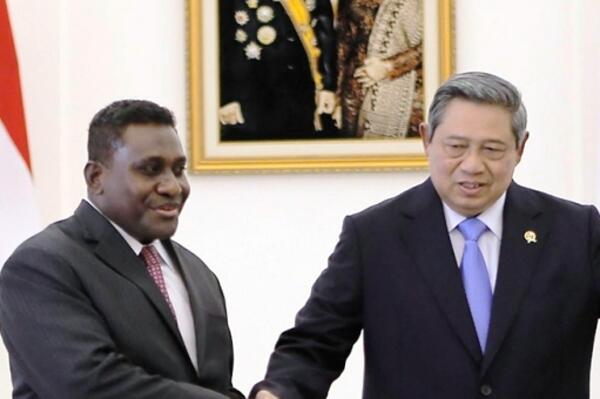 Prior to the Prime Minister’s visit, the two Governments’ reached an understanding that the Indonesian Government will refund any funds paid by the Solomon Islands Government to enable the state visit.
Source: Photo Supplied
Share
Thursday, 05 September 2013 08:10 AM

The Central Bank of Solomon Islands today has confirmed receiving a total of $1,225,806.41 (US$171,000.00) from Jakarta being for reimbursement of travel expenses of the Solomon Islands delegation visit.

In a letter to the Permanent Secretary of the Ministry of Finance and Treasury today, the CBSI has confirmed crediting a Government Revenue Account No.0260-002 with the amount of SI$1,225,806.41 at the exchange rate of 0.1395.

Prior to the Prime Minister’s visit, the two Governments’ have reached an understanding that the Indonesian Government will refund any funds paid by the Solomon Islands Government to enable the state visit.

A statement from the Government today said critics of the trip over funds paid by the Government should now allow tax payers to prove the reimbursement promise made by Prime Minister Lilo last week.

Debate over the cost of the trip hit headlines when anti-government groups criticized the Prime Minister’s delegation claiming the trip incurred unnecessary costs to tax payers.

But Prime Minister Lilo explained all aspects of the state visit during a press conference on Wednesday 28th August saying his critics should "think beyond just the cost of the trip but should look at future benefits to Solomon Islands as a result of enhanced economic cooperation forged by leaders of the two countries."

The refund of expenses by the Indonesian Government is just a small part of the visit while both Governments are now working to advance an enhanced economic partnership between the two countries.

Prime Minister Lilo’s recent trip not only produced greater technical cooperation, trade commitments and people-to-people relations, but has been hailed by Indonesia for the country’s ongoing active role in multilateral forums such as the Coral Triangle Initiative, the G7Plus and also APEC.