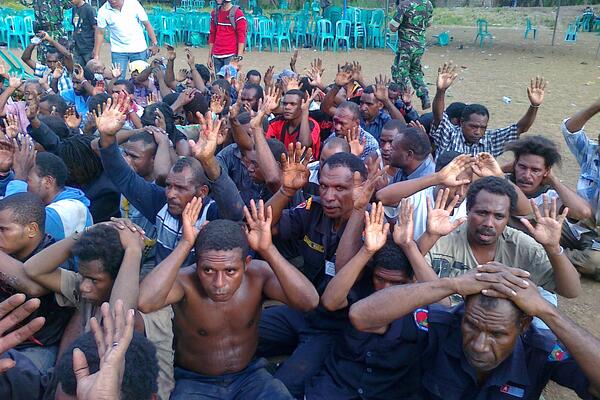 Wrapping up its fourth year of advocacy, PFF chairs said that ongoing suppression of freedom of expression under Indonesian rule often involves violence against news media.“Well documented allegations of killings and torture depict medieval levels of brutality by Indonesian security and ad-hoc militia forces in West Papua”, says PFF chair Titi Gabi.
“Ongoing violence against citizens makes a mockery of Indonesia pretensions towards democracy, adherence to international law, and the peaceful majority of the world’s biggest Muslim nation.”
“There is also concern over Indonesia security forces infiltrating Papua newsrooms and planting fake stories”.
PFF endorses calls from October by the Pantau Foundation and the Southeast Asian Press Alliance for Indonesia to uphold the right of citizens to freedoms of speech, to end violence against journalists and to prosecute those responsible for violence.

In November, PFF joined IFEX, International Freedom of Expression Exchange, in a 23 day campaign against a “culture of impunity” surrounding those in authority across the region.PFF co-chair Monica Miller said concerns also include a “culture of silence among partner news media across the islands, as well as Australia and New Zealand, when it comes to sensitive issues like West Papua.”
Miller praised an upturn this last year in media attention on West Papua, notably via state broadcasters like Radio New Zealand International and Radio Australia.
“After a decade or two of focusing mostly on Fiji, it is welcome to see metropolitan media including newspapers address much bigger concerns in West Papua,” says Miller.
“Yet many articles lament the lack of public awareness about serious events happening on our own doorstep.”
“Clearly there is much more that could be done, including not bowing to political sensitivities that deem West Papua to be outside the Pacific Islands region and of concern only to Indonesia.”
Reporters Sans Frontiers ranks Indonesia at 146th place, on a list of 179 nations followed by the press freedom body.
PFF also expressed concern about assaults and threats against journalists in Papua New Guinea and other states across the region.