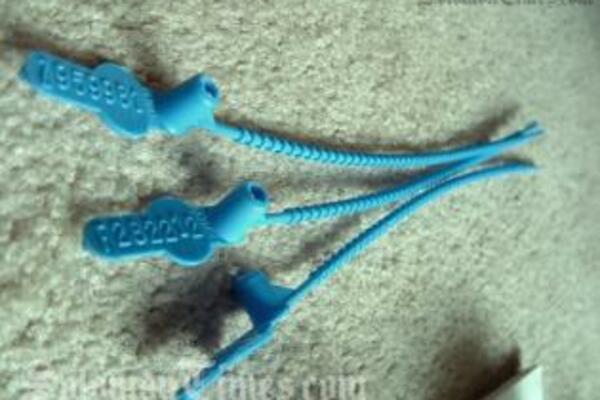 The new security seal, similar to the one above, is used in many countries for their elections.
Source: Photo Supplied
Share
Friday, 18 June 2010 09:53 AM

The Electoral Commission has improved the security of ballot papers for the upcoming coming National General Election.

"The ballot boxes will no longer need locks and keys to open as previously being used in past elections", Mr. Haununu said.

They will be sealed with a special strong seal which has a number with the Electoral Commission logo on it and can only be removed by cutting with a knife.

The new security seal is used in many countries for their elections and has been successful in securing voter's ballot papers during polling day and transportation to counting centers.

Mr. Haununu said this new security method will help identify if someone has opened the box during polling day and prior to counting.

"This change is an important advancement for voters' confidence and trust in the polling process as well as the security of their ballot paper", Mr. Haununu said.

The Electoral Commission has been working towards making improvements to strengthen the current electoral system in addition to minor reforms made to the Electoral Provisions Act this year.

During training for Provincial Election Managers, participants were shown by electoral officials how the ballot box can be sealed and how secure it is.

Mr. Haununu said that with the new security seal, ballot boxes will no longer need locks and keys.

"This will solve the problem of losing keys and because ballot boxes cannot be opened and closed without seeing that the seal has been broken - will stop people being suspicious about the safety of their ballot papers," Mr Haununu said.

Due to the numbering of each seal, opening of ballot boxes prior to counting will definitely not possible because it will easily be identified.

Mr. Haununu assured both election officials and the public that the Electoral Commission will be working hard to ensure the National General Election is done fairly where officials work transparently and voters' ballot papers are kept safe and secret.

More demonstration on how the ballot box is sealed will be done during our Electoral Commission awareness outreach programs to some of the provinces as well as in and around Honiara town.

Mr. Haununu said that the Electoral Commission is working hard and trying its best to conduct a free and fair Election for this upcoming 2010 National General Election that is all voters to cast their votes one time only at one place.