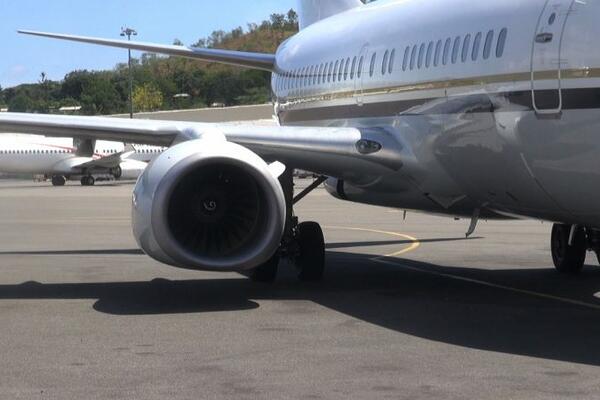 The matter was reported to authorities in Singapore, with PNG authorities also investigating the incident.
Source: Photo supplied
Share
Thursday, 19 January 2017 10:08 AM

The Solomon Islands Immigration office says that it stands ready to assist in investigations by Air Niugini over disturbance on its flight to Singapore by a passenger who was said to have transited through Honiara last week.

The passenger, who was said to be of Indian appearance, was on an Air Niugini flight to Singapore when witnesses say he inflated a life jacket and attempted to open the emergency exit door. PNG businessman, Mathew Minape, was one of two passengers who restrained the passenger, eventually strapping him in his seat.

Minape has not ruled out the possibility of a plane hijack, but says the fellow passenger was deliberate in his actions, but failed.

“We have not received any request for assistance, but we are ready to assist if that is needed,” a Solomon Islands senior immigration officer stated.

“We are not aware of this incident, but if the passenger did transit through Honiara, or picked up from Honiara, than that is something we could look into if requested.”

Air Niugini's management told NBC News that it was certain that it was not a hijacking incident, and that at no time was the safety of its passengers and crew at risk.

The matter was reported to authorities in Singapore, with PNG authorities also investigating the incident.