Iguana Determined to be a New Species and an Herbivore 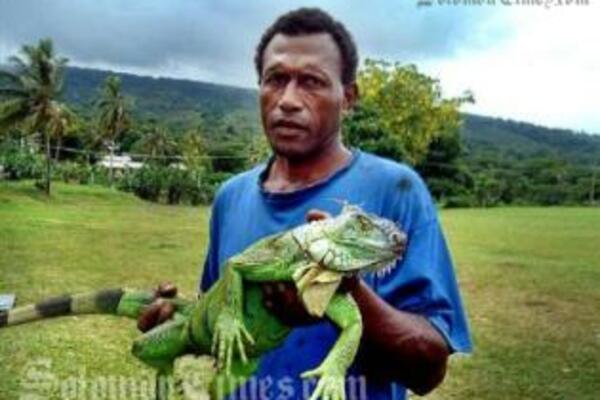 Iguana found by Lovonivonu villagers in Fiji. The reptile is new to the country and is an herbivore.
Source: Fiji Times Online
Share
Friday, 29 January 2010 05:25 AM

A new iguana species found on the islands of Taveuni and Qamea in Fiji which caused alarm for islanders has been determined to be an herbivore and scared of humans.

The creature was discovered earlier this month, according to Fiji Times Online, by villagers who feared the creature would threaten chickens, ducks and indigenous species and wanted the reptile destroyed.

A team from the country's Agriculture Department traveled to the islands to see the creature and study it.

According to Fiji Times Online, the team have identified the creature as the Green Iguana of the Iguana Iguana species, which is a new species in Fiji.

Fact-finding mission head Chief Veterinary Officer Dr Robin Archari said the iguana was a herbivore that fled from humans, contrary to reports from the islands.

The department is urging people keeping the creature as pets to surrender them," Dr Chari said.

"We have reports that some iguanas are being kept in Nadi.

We're concerned they could be carrying pathogens that could threaten indigenous species."

"It's actually scared of humans. All these reports are false because this is a herbivore that consumes mangrove leaves and bark and occasionally eats insects," he said.

"The iguana was introduced by this foreigner who constructed ponds with the intention of breeding more. He brought in two iguanas and they've multiplied to about 1000."

Dr Archari said the creature only took to the sea to escape from humans.

According to the report, the iguana discovered by Lovonivonu villagers escaped the custody of a passenger on an inter island ferry.

As a herbivore, the Green Iguana also eats dalo leaves.

"We have had reports that it has damaged the vegetable farms of some but we are trying to determine the truth behind this and whether it is a threat to the natural flora and fauna," he said.

Further trials will be carried out on three iguanas at the Koronivia Research Station before a decision is made about its future.